CD Review – Old Gray Mule “Like a Apple on a Tree”

CR Humphrey, who is better known under his nom de musicien Old Gray Mule, is a hell of a good guy. It’s clear when you see him play live, when you hear the soulful licks he lays down on tape, when you chat with him, and when you read the notes for the latest Old Gray Mule album Like a Apple on a Tree: everything he does is imbued with lots of heart, humor, and flat-out joy. He gives the lie to the “tortured artist” myth – you rarely meet someone more satisfied with his lot in life, even through the struggles, than Humphrey. And it’s evident in all he does. Take for instance, what he wrote about the song “Thanksgiving ’12” from Like a Apple on a Tree.

“I wrote this song in 2008 the day I got home from the hospital after finding out my three week old son was going to live. He’d died in his sleep 5 days before, I found him in his crib, did CPR on him, got him back…and my wife and I spent the next 5 days awake in the hospital with him. It was a miracle, he was going to be ok. I went home to pick up some clothes for Molly and I and when I walked in the door, I felt a need to play my guitar, so I sat down and played this song all the way through. It was Thanksgiving Day 2008. My son will turn 4 this October.”

And that joyful, tearful relief, that great, big exhalation after five days of breath-holding comes through loud and exhilaratingly clear in the song. This is the sound of a happy, grateful man.

Throughout the ten tracks, mostly originals, of Like a Apple on a Tree, Humphrey plays that good heart out with guitar work that is so immaculate and sharp, you could cut up your next meal with it. Though let me be clear: it is immaculate and sharp, but by no means clinical. Humphrey has sat at the knee of the best the Mississippi hill country has to offer (and when you’re talking blues, that’s pretty damn good) so these songs are made to play in stripped down, humid, dimly-lit jukes. With the help of friends like Lightnin’ Malcolm, Cedric Burnside, Australian artist Snooks La Vie, the welcome return of frequent Old Gray Mule partner CW Ayon, and others, Like A Apple On A Tree is going to make you feel something, whether its joy, the blues, the desire to strip down with a willing partner or just the need to shimmy your hips way, way down.

One of the highlights of the album is the above opening track, where Cedric Burnside handles drums and vocals on a cover of “Come on In”, a song originally by Cedric’s grandfather, the great R.L. Burnside. The song is one of two R.L. Burnside covers on the album (and those are the only non-originals in the ten tracks of Like a Apple on a Tree).

Though Burnside the elder isn’t the only great to have a direct influence on this album. As Humprhey writes about “Standin’ There Cryin'” (with vocals from Snooks La Vie):

This song was inspired by a story T Model Ford told me late one night after we’d played 5 hours opening for him at Club 2000 in Clarksdale, MS back in 2010. Less than a week later he had the first of a series of strokes that affected his right side.

If you’re up for some authenticity, as in authentic heart, authentic joy, authentic feeling, you’re not going to do much better right now than Old Gray Mule’s Like a Apple on a Tree. 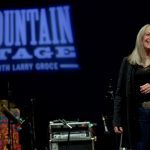 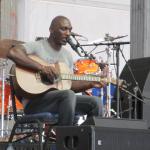