There’s always a little apprehension when receiving music from an unfamiliar artist. You want to do right by the artist but many times the CD artwork doesn’t conform to the material within. No clue what to expect when you slide the CD into the tray and the first notes begin to float from the speakers.

Maybe it will be pop music that sounds like everything else that has come before in the last thirty years or more. Maybe it’s a jazz wannabe who hasn’t got a clue about inflection, timbre, phrasing and style. Or another rocker who has all the volume, power and determination and none of the understanding of what makes for a great rock song.

But, Toronto, Ontario-based Nancy Dutra appears way too well dressed and sophisticated on this album. I expected Peggy Lee with a guitar, or maybe she’s a music teacher who took her student’s advice and decided to record an album herself. Nancy does look good though so my curiosity was peaking. Time would certainly tell if this young lady was a diva – a word I hate unless it’s applied to opera singers – or a mediocre middle of the road ballad singer with breathy vocals. At best, I expected Julie London and maybe there would be one track as good as “Cry Me a River.”

But, then there came this voice.

The one that emanated from the speakers had gentle jazz guitar notes spilling around like brandy in a big sniffer glass. It was a smooth blues voice . It has just enough jazz in it to intrigue the untrained ear — to turn toward the speaker and listen, listen, listen.

And that’s worth exploring.

Nancy Dutra possesses this brandy. For readers who need a familiar reference point she has a voice similar to Norah Jones — but then it isn’t. She pronounces her words differently; her tone is razor sharp, she holds her notes so impeccably well you wonder how much formal training she may have received. But, blues, jazz – too much formal singing education and that could stifle such a voice. But not Nancy Dutra.

The first track on “Time Will Tell,” — Ms. Dutra’s strong collection of melodic bluesy-jazz oriented songs seems to have been painted with quick brush strokes of grey, white and black – and appears like a boxful of the best made French chocolates.

The opening track is the short “Tears Would Fall,” and it’s a wonderful introduction to this smoky voiced but very controlled singer — followed by the sad yet captivating “Time Will Tell.”

Ms Dutra is so diversified that her dipping into a more countrified song like “Your Time Is Through” is equally artistic as a jazz tune or potent as a blues song. I love Nancy’s ability to hold notes, hold syllables on just the right words, emphasize the right lines, and with ease and control. She is effortless, yet the songs don’t suffer from this formal training if she did indeed have some.

In the printing industry you can print black ink alone and get a black image. You can add another tinted black for richness and get a duotone or you can create a four color black from 4 colors. That’s all you really need to create a final image. Separate colors just make things easier. This could possibly be the color scheme on the cover of Nancy’s CD. It certainly has a little soft red cast to it which is usually the dead giveaway. My point?

It appears to be just black and white but in reality – it isn’t. It’s 4 distinct colors in register and it’s beautiful. 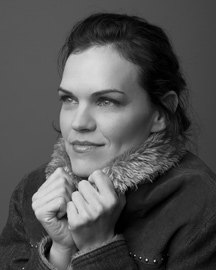 “Weak, Weary and Worn,” another example of this hocus pocus. Her multi-tracking is soft, her lyrics possess a magically sweet message that doesn’t have you running to the dictionary — but seems to just gently caress your face the way someone who truly loves you would.

“Sweet Tomorrow,” ventures deeper into a country-roots realm with its lap steel guitars crying gently and supported by many excellent musicians. This LP is filled with many delightful music genre samples. Candian singer-songwriter Ron Sexsmith appears on this track to sing harmony vocals as well — and he co-wrote “Sweet Tomorrow” with Nancy.

I’m amazed I haven’t heard of Nancy Dutra before but, obviously Ron has — and that’s good enough for me. Where has she been?

Nancy has a host of solid Canadian and American artists on this effort but her performance and presence is solid. You know who’s in the driver’s seat.

“Sorrow Bound,” begins with Nancy’s voice deeply taking what sounds like a basic country-folk oriented song into new areas. Ron Sexsmith returns on this track to contribute harmony vocals. A melodramatic middle-of-the-road approach that is spiced with sad instrumentation and a strong story. There’s just a suggestion of echo on her voice to give this tune a little other-worldly effect. Especially on words such as “I’ve no answers, only questions, we’re not always safe and sound….” It’s all reminiscent of moments listening to early Jewel, Joan Osborne or Lucinda Williams. But, Nancy Dutra is her own woman – and she is quite an original in everything from what she sings to how she sings it.

“Ride That Train,” is Nancy vocalizing a typical Americana song — but has some special nuances if you listen closely. Her vocals are authentic in their interpretation with every word that brushes past her lips. It’s been given new life because its been sifted through a little European vigor by way of Canada — if that’s possible.

“Nowhere Left To Fall,” is a real highlight. Nancy changes direction and offers a lament that is sung beautifully with harmony vocals by co-writer of “Nowhere Left to Fall,” — Kevin Welch.

Even the subject-matter of these Americana songs are told differently than their American counterparts. This isn’t a bad thing either….it’s being approached with new insight and while that sounds like a put down I mean it this way: Americana artists seem to be playing it safe most of the time, or they seem to be just following a lead set down decades ago. Few American artists today are experimenting, pushing the envelope, few are daring and challenging themselves. There are a few — John Haitt, Buddy Miller and Jon Dee Graham come to mind.

Then along comes a Nancy Dutra with a sound that’s not new but is presented in an original, creative manner. Her approach is refreshing, taking some influence from others but never so much as to even suggest she is trying to sound like them. Nancy’s voice is just too out of the music box for that.

Some may even say, well Nancy isn’t super famous. But, I would rather bet on a career of originality and being temporarily obscure (she isn’t going to be unheard of for long) than a career of being a wannabe who sounds like so many others.

Nancy Dutra doesn’t sound like others. That may be the key to her eventual success even if we require some patience…Do we really have to measure how many artists did become well known because they were themselves and stuck it out for the long haul? John Prine (he is well known, yet he releases his own CDs on his own label Oh Boy!), Tom Waits, Lucinda Williams (no over night success there), Patti Smith (regarded as a vulgar punk rocker and now she is so respected and endeared it’s a miracle)…and dare I say it….Bob Dylan (he was John Hammond’s folly at Columbia Records and Verve Records rejected Dylan completely). Want to add more? Look up a group named The Beatles.

Listening to “I Cry,” Ms. Dutra slides all over this melody with typical American style vocalizing but she doesn’t sound as if she is emulating anyone. I don’t think she can. She sounds like herself  and no one else. Did she do this consciously or is it God’s gift? Who knows?

“Bye Bye Baby,” gives rise to a vintage style country vocal basically forgotten today. It’s that Dinah Shore, Doris Day, Patti Page style that rises to the top like cream in this song. Pop oriented but not forgetting its roots. The lesson learned is this: it works. It sounds new here. She’s doing here what Mandy Barnett does in mining the Patsy Cline sound. The reminders are strong but the presentation is respectful and creative.

Nancy and her backup singers have “treated” this melody the way we add MiracleGro to make every day green grass even greener, bigger and bolder. This song is a bit lazy in nature as it moves along slowly, but its  guitars in the old country tradition are attractive, having the warmth necessary to enjoy its charm. This would be an ideal return to jukebox country music. Very enjoyable…in a simple, honest segue.

“Mama Taught Me How To Pray,” shifts gears again and with Suzie Vinnick’s harmony vocal supporting Nancy’s it paints a different melodic color and meshes their voices into one. Very effective. This song would have attracted the likes of Loretta Lynn or even Patsy Cline herself and these ladies didn’t just sing anything.

Les Cooper produced and mixed this set of fine tracks by Nancy Dutra and I’m looking forward to hearing more from this young lady. They say she was a late bloomer in getting her career started – 24 – but, better late than never. Since when is 24 being late?

There are several February dates scheduled — see Nancy’s website calendar for more information regarding these upcoming shows. http://nancydutra.com/
There are samples tracks at CDBaby – http://www.cdbaby.com/cd/nancydutra