This could be a throw-back to an earlier time but Linda McRae has pipes.

At first listen of “Ramblin’ Man” Linda sounds like she’s the resurrected ghost of 1920’s guitar-banjo-vocalist Lee Morse – who in the Paramount Picture’s A Million Me’s video clip there’s a segment at 3:00 minutes where she sits down in a café with an acoustic guitar and proceeds to do these vocal gymnastics similar to yodeling but it’s not yodeling and Linda McRae is mining this vein in her own expressive way.

Morse was an enigma — she sang jazz, blues, country and she played the instruments. She had long hair, was sexy, wore flimsy satin blouses, wore pants and just didn’t look 1920’s. Some songs were Hawaiian in nature, some were clever novelty songs and others were serious blues and jazz songs.

Linda McRae’s new CD “Rough Edges and Ragged Hearts” – is an album that’s been nominated for Album of the Year – Canadian Folk Music Awards. This is Ms. McRae’s fourth release and the award winning Ms. McRae displays wonderful  pensive guitar playing on this poignant song showcasing the fine depth of her vocals. Linda has been in the music business for 25 years and has earned a Juno nomination, and double, Platinum, triple Gold recording status as bassist and accordionist with Celtic/Roots group Spirit of the West.

“Deck of ‘52” is a tune dedicated to the late singer-songwriter Townes Van Zandt. There’s some fine fiddle playing following Linda’s potent vocals. At times her voice is commanding and deep but then it also soars as the guitars pluck their shimmering notes around her.

“Hope It Lasts Through Supper,” begins with plaintive banjo notes and then Linda whip cracks her voice through a quirky melody that is not a novelty song. This is too good to be a novelty song. It is a very pleasing fun song. I had said in an earlier review that every artist needs to have one track that has some humor – if for nothing else than to personalize the artist. Linda McRae videos are fairly humorous in nature – but this is her stab at being light hearted.

“Three Midnights,” features a steady banjo lead but this is darker. Vibrant upfront Ray Bonneville harmonica solo slices through the music with a melodic cry. Paul Butterfield would have been proud. The musicians are very skillful navigating through this moody, mysterious and clever track. This one is excellent. It almost sounds like Tom Waits could have written this.

“I bought a house with no windows….”– “…darker than three midnights in a jar.”  I can appreciate artists who play with the English language and really pull out some totally original approaches to their lyrics. It helps to distinguish the real creative people from the people who are just going through the motions and hoping for luck. This is a song an artist can be proud of.

Linda McRae and her husband James Whitmire’s “Three Midnights” is about addiction and it is compelling. Quite a tight four minute motion picture going on in this song.

“In the Valley Below,” is supported by accordion and banjo but Linda’s voice is still the commanding sound – deep, authoritative and musical. I’m impressed with how Linda goes from deep vocals to high smooth flowing high notes and she is consistent through many songs by singing in this manner.

“Geppetto’s Boy,” of course, is the woodcarver who made Pinocchio. This is ingenious songwriting. To take an age old fairy tale and carve out (no pun intended) a story about being a girl — not a marionette — who doesn’t want to end up like Geppetto’s boy.

Reduced here to just Linda – banjo, claw-hammer and vocals and Marc L’Esperance – fiddle, spoons and Jaw harp – the sound is still full and driving. A real nice re-telling of an old story with a modern point of view.

“Higher Ground” is a poem set to music by Linda McRae. Written by cowboy poet Joe Green – it relates the tale of a homeless veteran. You’d think more musicians would sing songs similar to this but there aren’t. Again, Linda and Marc play this together and the sound is impeccably clean and full. A full band isn’t always necessary to get your message across or convey something with drama to pull a tear from an eye.

“Ramblin’ Man,” is the track that reminded me of 1920’s singer Lee Morse’s voice. This is an old Hank Williams song rendered with conviction and strength by Linda and her musicians. Linda’s soaring vocals are stunning and Hank would definitely be smiling. Banjo-wise – I am certain Pete Seeger would nod in the affirmative. It has a nice simple folksy tone to the strumming and I was waiting for Linda to say “sing along” but that didn’t happen this time. A hat tip to traditional styles with respect and fine musicianship.

“Four & Twenty Blackbirds,” is a nursery rhyme reading – this approach reminds me of the marvelous McGarrigle Sisters — Kate and Anna. I certainly wish Linda McRae had the opportunity to sing with these fine Canadian sisters. Kate has since passed away but I certainly hear Linda McRae stepping into Kate’s shoes for a moment and respectfully singing with Anna and niece Martha. (Wainwright). Linda would be a perfect addition. She has that golden thread of tone in her voice to sing songs in the McGarrrigle tradition. I may be speaking out of turn here – for all I know Linda McRae may have already performed with the McGarrigles – if so, I will stand corrected. I just didn’t find any information. 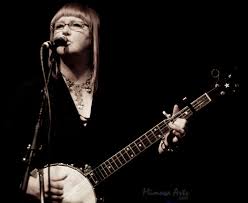 “Doin’ Life Without Parole,” – there are drums on this one….wow. This is a jaunty gallop of a song with fiery fiddles and aggressive banjo. Linda is strong, strong, strong here. This could be sung as a blues song but this Linda McRae-James Whitmire original is filled with aromas and flavor – if that’s possible. No missing the spices in this stew. Excellent. Serve another.

“Be Your Own Light,” is the big track on this collection – fueled by the Juno winning gospel trio The Sojourners and the 50-piece McRaezie Choir. Energized gospel — an appropriate closer on an album that is like a strawberry cheesecake. The entire cake is excellent but it sure is fun picking on each song like the big cold strawberries on that cake.

It just tastes that good and you wish there was more – and you know these songs aren’t fattening. They are satisfying. Maybe that’s the sum of the review – this music is satisfying.

However, there is some actual criticism – I arrived at “Be Your Own Light,” the last track on the CD and said: “That’s it? It’s over? There isn’t anymore?” That’s the confirmation that an artist has achieved their goal. Always leave them wanting more.

I will be looking forward to new Linda McRae music from her gang of jubilant musicians. They take us to places in their songs that are worth visiting. I also like redheads and Linda looks ever the artist on her CD sitting with her acoustic guitar at Kathryn’s Space in NYC. I wish my living room looked that good. The room personifies the music found on this CD. This one won’t ever be too far from my CD player.

The album artwork concept is also a very good design – produced by Saveria Renucci at Chez ChiChi. The package fully realizes the material inside. I hope Linda McRae and her husband James Whitmire share my opinion. The package is important – this is the first thing people see and make connections with. Especially those not familiar with the music. That’s the curve I usually throw in reviewing an artist’s CD – while I don’t always hold the artist personally responsible for the artwork – I will take a close look at how well they are marketing themselves. You can record great music but if no one reaches for that CD or download because the package looks cheesy – you lose that audience – you lose that client – those ears. That word of mouth. Independent artists must consider this far more importantly than a Bob Dylan, Emmylou Harris or Leonard Cohen. The art will help sell the music and artist when it simply compels that unfamiliar someone to reach out for it.

Marc L”Esperance who played on the album also gets a salute for a fine job: he recorded, engineered and mixed the project. Many worthy contributors played a role in making this all possible.

In addition: Linda McRae and James Whitmire are contributing $1.00 from the sale of each CD to be donated to the Canadian Shriner’s Children Hospital for the care of children with orthopedic conditions.

Linda has many shows scheduled and her calendar can be viewed on her website which also has links to where her CD can be purchased: http://www.lindamcrae.com/

Additional inquires and information can be found by contacting Tracey Delfino at Trespass Music – www.trespassmusic.org