“Coal kills.” Or can it possibly be “clean”?

The presidential candidates debated the issue because coal remains central to our traditional energy production, which now contributes greatly to pollution, damaging of the ozone layer, and the human toll on those who work in the industry.

We know continued reliance on such carbon-based energy will be environmentally devastating. You don’t need to be trapped in a suffocating coal mine to feel the heat. As the earth’s ozone layer erodes further, exposing us to the sun’s ultraviolet rays, we’ve just experienced the warmest 12 months — from July 2011 to July 2012 — in US history, the worst Midwest drought in decades, and an increasingly bizarre — but explainable — profusion of extreme weather events, like Hurricane Sandy.

Her new CD, Calling Me Home, finds her back on a larger label (Sugar Hill) and perhaps expanding her audience reach, with more artful symbolism than death-rattle spookiness.

But she’s still fearless. “Maple’s Lament” has a dead tree as its narrator. “Hello, My Name is Coal” wittily encapsulates the industry’s political paradoxes. ; “Black Water” depicts a mountain’s decapitation and living among coal-poisoned streams.

“‘Black Waters’ was written in 1970 or ’71, and it is so valid right now,” Mattea says. “I mean, people are living that story right now. I love that it clearly articulates that experience and also that, inadvertently, it articulates how little has changed.”

Since 1992, nearly 2,000 miles of Appalachian streams have been filled by mining wastes at the rate of 120 miles per year, according to the to Environmental Protection Agency.1

Novelist Barbara Kingsolver who, like Mattea is Appalachian-born, provides finely tuned liner notes: “The particular genius of Kathy Mattea is to call up the touchstones of hope and heartbreak that we all carry their pockets even if these mountains are not yours, the fact is everybody has a homestretch, where you feel little torn up because no matter which way you’re headed, you’re going towards home and also leaving it behind,” she writes. “Believe me, this is the soundtrack for that journey.”

Kingsolver pinpoints the universal chord that Mattea has struck on this recording. Politically loaded as the topic of coal is, the experience of home is nonpartisan, so Mattea appeals to our sense of what is worth preserving because it is an essential part of us — the shoe mud on rainy-day walks, childhood sing-alongs, dinner aromas in the kitchen, cheating at game playing, fraught holiday gatherings, crazy laughter, petty jealousies, preciously shared memories, secrets and shame and intense pride and gratitude. “I hope my relationship to the song and the story deepens,” Mattea says in a promotional video on our website. “(The album) Coal was like discovering the music I was meant to sing all my life but I had missed it.”

And she transports us to Appalachia and makes it feel an awful lot like our own home — even if you’ve never been there.

I finally drove into that near-mythical and misunderstood region in June, and its stately mountains and open-armed valleys infiltrated my being in a way I hadn’t expected.

So when I arrived with my sister Sheila at the Blue Plum Music and Arts Festival in Johnson City* at the eastern tip of Tennessee, I was primed for artists like Guy Clark, Darrell Scott and Malcolm Holcombe, with comparable ability to press on the pulse of the American home experience wherever it may lie (I’ve blogged on all three artists on this site).

“Appalachia is one of the last places in our country and maybe on the planet where people are this attached to where they live,” Mattea muses. “This is just our spot in the world. It’s one of the best places that has its own flavor. I think as I get older and as the culture changes, I realize how special it is.”

The centerfold photograph of the liner booklet for Calling Me Home, Mattea sits before a stunning backdrop: a river winding through golden-green mountainsides. 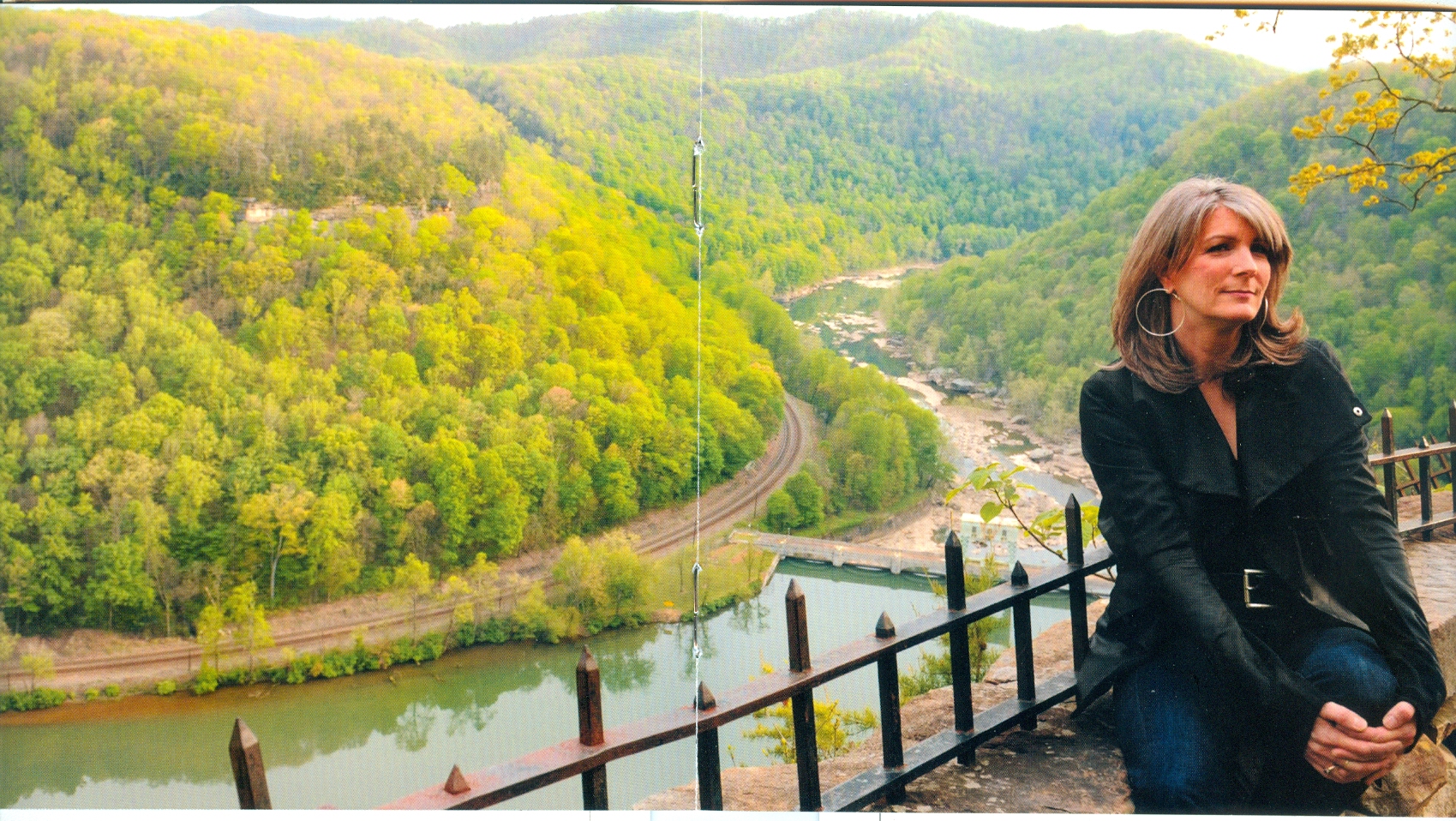 Yet “Maple’s Lament,” a song by Laurie Lewis, zooms the focus down to a single tree, even if it is too late:
“When I was alive the birds would nest upon my boughs
And all through long winter nights, the storms would ‘round me howl…
But now that I’m dead, birds no longer sing in me
and I feel no more the wind and rain, as when I was a tree.
But bound so tight with wire strings, I have no room to grow
And I am but the slave who sings, when master draws the bow…”
One wonders what today’s climate-change deniers think kills such a maple? Other “plants and trees,” as Ronald Reagan infamously blamed for air pollution?

Many of Mattea’s male relatives labored for years in the coal mines and paid the price, with black lung disease, or far more sudden death.
An old friend lay on his dying bed
held my hand to his bony breast
And he whispered low as I bent my head
Oh, they’re calling me home
They’re calling me home

(from “Calling Me Home” by Alice Gerrard).

And her focus on her home state of West Virginia underscores the economic reality people there live with — of losing jobs as well as their lives, and the fact that industry and political forces an Appalachia resist diversifying solutions to the inevitable decline of this non-renewable resource, which is coming closer to being tapped out in the region, according to Ken Ward Jr. in a recent article in The Nation.

The activist group coal River Mountain Watch and the consulting firm Downstream Strategies have suggested that building wind energy farms on some Appalachian peaks is the better long-term goal than “blowin’ ’em up real good” to get at the coal.  During my drive to Tennessee, I was captivated by a huge wind farm in Indiana with hundreds of turbines spinning beside the highway. How much more elegant and ecological would be one of these slender white turbines atop a blue ridge mountain, to make use of, and do justice to, its splendid height?

Throughout the album, Mattea and her guest harmonizers ride the supple, glimmering accompaniment of ace contemporary bluegrass musicians, including Stuart Duncan, Bryan Sutton and Bill Cooley, who penned “Requiem for a Mountain,” the instrumental which quietly closes the album with pure sonic vibrations rather than words, like whispering zephyrs and murmuring rivulets mourning the defiled majesty of yet another decapitated peak. 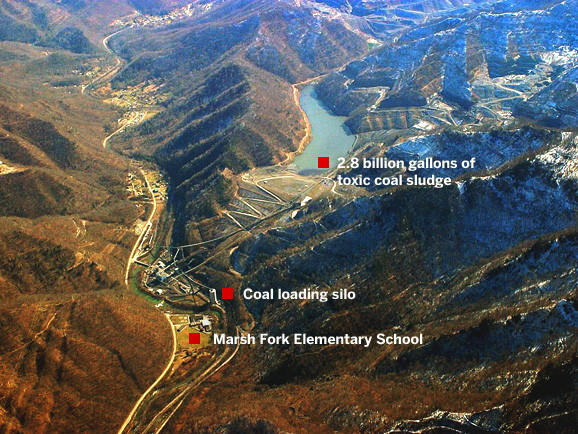 (In this photo/graphic, a decapitated Appalachian mountain has produced a lake of toxic coal sludge which hovers over a precariously close elementary school. Courtesy of the blog: After Gutenburg: Just Another Pretty Face.)

So Mattea is growing more sophisticated in her rhetorical skills as an artist. Though she now lives in Nashville and is a two-time Grammy winner, she’s hardly a typical peroxided country star. Coal was nominated for a Grammy Award in the Traditional Folk category. Her cover of Nanci Griffith‘s “Love at the Five and Dime” was her first major hit in 1986, (and earned the just-emerging Texas alt-country Griffith notice as a songwriter). Unsurprisingly, Mattea’s an environmental activist. She currently travels the country presenting Al Gore‘s renowned and still provocative environmental film An Inconvenient Truth and speaking about the importance of fighting global warming and the environmental and physical devastation of mountaintop-removal coal mining.

What might be her political preferences? We know Mitt Romney “likes coal.”

*Mattea’s next advocacy speaking apperance will be in Johnson City, TN on November 12 at “The Arts: Remembering Who We Are” Artists-In-Education conference at East Tennessee University-Millennium.

This was original published at Culture Currents (Vernaculars Speak) and in a shorter version in The Shepherd Express.