You can rely on these guys; if it’s got either of their names on the cover, then just get it. If it’s one of their occasional collaborations, you’ll be doubly rewarded. Gram Parsons’ old road manager calls them The Neverly Brothers, a name which fits with their own self-deprecating humour whilst paying respect to the quite wonderful harmonies they produce when they sing together.

The Comeback Album is a title that typifies this wry humour – it’s not like they were ever Simon and Garfunkel, or, for that matter, that they were ever away because they seem to be ever busy with some excellent musical project. What they’ve done here is assemble a fresh bunch of songs of varying vintage and a bunch of roots scene A-list musicians to make a superb album that slips around your shoulders like a favourite old jumper.  The more you listen, the more you appreciate the qualities that make it so comfortable and, like all of their music that I’ve ever heard, you’ll just keep going back to it to remind yourself just how easy and beautiful music-making can be.

Most of these songs are new or new-ish songs written by Brace and Cooper, mostly together. As ever, a lot of their material is built from some quirky observation of the vagaries of life and I think the prevailing mood here is a sort of good-humoured shrug of the shoulders, as if to say “Yeah, life throws stuff up but don’t get bogged down, don’t take stuff too seriously if it doesn’t merit it”. Typical of this sort of mood are the opening track, Ancient History and Nobody Knows which wryly quotes Chuck Berry – “it goes to show you never can tell…”.

When the guys get more serious they bring an emotional weight to their performance that causes you to pause and give thought to the song. I’m particularly fond of Eric Brace’s voice – there’s a yearning to it, but also a strength and authority that sounds like here’s a man with truth to tell you – but Peter Cooper’s voice is lovely too, whilst the fit of them singing together has an addictive quality that’ll bring you back to their music time and again. The list of supporting musicians here is pretty stunning if you have any interest in the Nashville roots music scene: Fats Kaplin on fiddle, Lloyd Green on pedal steel, Thomm Jutz, Richard Bennett and George Bradfute on stringed things, Jen Gunderman on keyboards…it all adds up to a big statement about how these guys are perceived by their peers, and that’s before you consider the “special guest” appearances from Mac Wiseman, Duane Eddy and Marty Stuart on Tom T. Hall’s Mad, a wryly humorous song that sits neatly with everything else here.  For all the familiarity of the instrumentation there’s a bit of a twist on the East Nashville sound going on. Jen Gunderman’s piano is more to the fore, even having a bit of a Jackson Brown moment on Johnson City, but, even more than that, it’s the surprise appearance of Rory Hoffman’s clarinet playing on a couple of songs that brings a new dimension to things. On Thompson Street in particular, the sound seems to evoke Gershwin-era jazz and I guess that seems to highlight a deep love of American life that informs the music that these guys make. For their “comeback”, Brace and Cooper have made one more album to make the heart glad in the years to come. 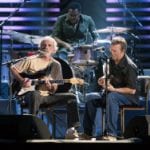