As fine as was 2009’s Golden Apples of the Sun, Herring’s latest release is even more completely her own. In addition to writing ten of the album’s songs, she’s reanimated the eleventh, “Flee as a Bird,” from a mid-nineteenth century hymn book. Her music is given added muscle by producer Erick Jaskowiak and a backing band (including guitar, pedal steel, fiddle, banjo, bass and drums) that leans more to country than folk. Her vibrato, reminiscent of Buffy St. Marie and Joan Baez, remains a plaintive instrument whose tone is as telling as its words. Her songs are literate and historical, telling of injustice, greed, and inextinguishable hope that intertwines the struggles and accomplishments that have threaded through country, folk and blues. Her stories highlight moments of redemption, triumph and peace against a backdrop of turmoil and grief, but tears – whether of anguish or relief – are never far away. Herring welcomes Claire Holly, Katherine Roberts and Jackie Oates as harmony vocalists, and an a cappella turn with Mary Chapin Carpenter and Aoife O’Donovan on “Traveling Shoes” is especially fine. Herring’s fans will enjoy this next chapter, and those new to her work will be quickly motivated to explore the back catalog. 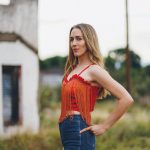