Bumbershoot 2011 lineup to include Mavis Staples, Ray LaMontagne, Over the Rhine, more

Bumbershoot 2011 announced its full lineup last night. As usual, the roster is remarkably diverse, including bands you long ago forgot you loved (Butthole Surfers, anyone?), plenty of up-and-coming indie rock acts and local Seattleites. There will be DJs and hiphop, and a fairly impressive collection of roots/Americana/alt/country/indie/whatever folks.

If you’ve never been to Bumbershoot before, rest assured it’s not your typical Americana music festival. It takes place at the Seattle Center – a giant urban park situated adjacent to the Space Needle and the Experience Music Project. There are so many stages, I can’t even count off the top of my head, which feature everything from music to comedy, literary events (readings, etc), film, and other areas of the arts. There’s definitely a strong focus on local talent, but the regional and national acts are no small potatoes – Bumbershoot tends to pull out all the stops when peopling its main stage, and even peripheral stages. I’ve seen incredible performances through the years at Bumbershoot. Some which stand out: Neko Case, Death Cab for Cutie, Katy Perry (don’t judge – almost everyone I talked to that day had snuck into her show out of curiosity, and walked away impressed), the Yeah Yeah Yeahs, Sharon Jones & the Dap Kings, Band of Horses, Sheryl Crow, Blondie, Bob Dylan…and those are just the big names. Often the best thing that happens at Bumbershoot is the artist you never expected to see – the one with whom you’re barely familiar.

Last year, Edward Sharpe & the Magnetic Zeroes packed a small stage so full, there was no getting onto that field if you hadn’t shown up early.

This will be the first year in many that I won’t be in Seattle for the big event and, based on Saturday’s lineup alone, I’m beginning to regret that decision.

But, if you’ll be in the area, or are looking for an excuse to do so, I give you now the complete Bumbershoot 2011 lineup and press release, along with a couple of choice videos for good measure:

Please note that The Presidents of the United States of America are confirmed for the Mainstage with Brite Futures opening, date TBA.

Rather than focusing on household name acts that don’t need the support of a festival environment, Bumbershoot’s renewed approach to booking draws on the combined strength of the artists to create an experience that’s ripe for exploration — a reinvigorated philosophy that has also increased the number of musical acts from last year by approximately 20 performance slots, for a total number of 121 artists expected.

“While there are plenty of changes this year, what hasn’t changed is our commitment to offering the most diverse festival lineup around,” says Chris Porter, Programming Director for One Reel. “Regardless of your age or tastes, there’s an artist appearing at Bumbershoot that will appeal to you.”

This year, patrons will have the chance to catch Grammy-winning blues singer Mavis Staples and Rock N’ Roll Hall of Famer Leon Russell as well as such varied artists as The Kills, Over The Rhine, Eyehategod, Butthole Surfers and local up-and-comers Shabazz Palaces, Campfire Ok and Yuni in Taxco.

They’ll also be able to thoroughly explore the rich world of electronic music through a partnership with the Decibel Festival. Curated by Decibel founder and organizer Sean Horton, the EMP Sky Church stage will feature some of the genre’s most exciting regional and national talent throughout the weekend, including Nice Nice, School of Seven Bells and Tycho. With a focus on live electronic music performance and video accompaniment (featuring VJs Momo the Monster, Brandy Gray, Epileptic and T.J. Davis), the Decibel Stage will offer interactive multi-media explorations using the venue’s state-of-the-art screen. As part of the partnership, the festival will offer additional late-night

programming when Bumbershoot After Dark — featuring more established electronic artists — takes over the Exhibition Hall from 10 pm through 5 am. Lineup and ticket information will be announced June 15.

Further Bumbershoot 2011 lineup announcements, including more musical artists and Literary, Comedy, Visual Arts, Film, Dance, and Theater programming, will be made in the coming weeks. For up-to-date information, visit the Bumbershoot website at bumbershoot.org. 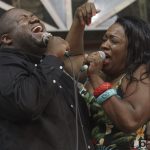 THROUGH THE LENS: The New Orleans Jazz & Heritage Festival Returns In All Its One-of-a-Kind Splendor