Both sides of Roger Alan Wade

“I live in a room with a green radio/Curled in the womb of a 29 year low/Four walls from heaven and one sin from hell/In room 17 at Deguello Motel.”

Those words, sung over a simple acoustic guitar lick, provide the opening for Deguello Motel, Roger Alan Wade’s best album to date and the best singer-songwriter record in several decades; an album that is intelligent, engaging, and, above all else, darkly realistic. This is one of the very few albums that warrants serious comparison to classic records like Phases and Stages or Nebraska, perfectly capturing the sense of real-life malaise and disenchantment that is the antithesis of everything on pop radio, feel-good country stations, and new wave hipster songbooks.

To those of you who are familiar with Roger’s previous work those words may come as a bit of a shock. Indeed, you’re probably asking yourself, “Is this the same Roger Alan Wade who wrote ‘Poontang’?” and wondering if I’m off of my meds. So I guess a little history lesson may be in order.

Once upon a time, Roger worked in Nashville, writing songs for other folks to record. Guys like Johnny Cash, Waylon Jennings, and, of course, Hank Williams, Jr., who took his song “Country State of Mind” to number one back in 1986. But when Nashville stopped making country music sometime around the early ’90s, where was a guy like Roger to go? For years he played for next to nothing in honky-tonks and clubs entertaining anybody who would listen until his cousin’s rise to stardom would provide his big break. So in 2005, Wade’s All Likkered Up became the first release on the independent label Johnny Knoxville Records.

Consisting mainly of novelty songs like “Butt Ugly Slut” and “Gone Back to Whorin’,” All Likkered Up was the sort of album you would break out at late-night parties and was a big favorite of mine around that time. But there were a few songs on it like “Sweet Wine of Sorrow” or the heartfelt “Johnny Cash has Died” that showcased Wade’s ability to stretch out in a more serious direction. Following the album’s release, Roger wouldn’t release anything else until 2009’s Stoned Traveler, another very good album with about a 50/50 balance of novelty songs and more traditional singer-songwriter material.

Beginning with the bleak and haunting title track, the album evokes an air of hard luck, hard times, and blown chances, all told by Wade and his acoustic guitar in classic troubadour fashion. From the beginning, he paints a picture of Deguello Motel as a wasteland populated by folks who probably wouldn’t be welcome at the Holiday Inn. “There’s an old Mexican dirge this place is named after,” Wade sings, “And I heard it once in a box office disaster/The Duke told his boys said, ‘It means leave or die’/I don’t know much Spanish but John Wayne don’t lie.”

The whole album is like that. It’s an epic concept album and “Leave or die” seems to be the only choices for most of the folks described in it’s poetic lyrics. For example, the second track “Rock, Powder, Pills” is a tragic tale of drug addiction, hopelessness (“tired of lickin’ specks up off the floor”), and neighbors who look like Dr. Dre.

While it’s not all quite that bleak and several songs, such as “Cowboy Angel,” “Old Dixie Highway,” and “Honkey Tonk Rose” are more typical country tunes, they are still written and performed flawlessly, bringing to memory guys like Kris Kristofferson and early period David Allan Coe.

My favorite song here is probably “Here I Go Again,” the simple story of a bus ride home turned into something special by Wade’s imagery-laden lyrics.  “Talked to a girl sittin’ next to me, said I was goin’ down to Tennessee,” he sings, “Told her I was a poet, she said she ain’t never heard of me/The memories like some stoned ol’ soldier stumble through my mind/Made me wonder if where I was bound was worth all I left behind.”

On “Ruins of Paradise,” Wade uses metaphors and allusions to The Wizard of Oz to describe modern-day America as a land full of hostile Pentecostal prophets, rainbow cowboys, bleeding jackals, and girls like Jenny, who “wound up on the fringes of ballet” (a recurring theme throughout the album). While the lyrical structure sounds like it could be a lost Springsteen track from the Born to Run era, this is far more sincere than anything the Boss has done in a decade or more.

There are many layers of depth to this record. There’s no denying that it’s a concept album, but it’s subject isn’t always clear. Sometimes it seems to be about the economic wasteland our politicians have turned this country into, although, unlike a few tracks from his last album, nothing here is overtly political. At other times, it seems to be a bittersweet embrace of a group of people who refuse to conform to modern day society’s rules and standards, people who have chosen to live life their own way, but realized that there’s a hard price to pay for it. Mostly, though, this is a very personal album that seems to be about Wade’s own addictions, although he doesn’t address this directly until the last track, “3rd Chance Blues,” where he declares “I quit that shit before it killed me, but not before it made me not wanna bend them guitar strings.”

Although the only instrument on the album is Wade’s acoustic guitar and there are no overdubs, this is the farthest thing from the modern definition of folk music. There’s nothing here that hipsters will sing along to in overpriced coffeehouses, nothing that NPR will play for you on your morning commute, and nothing that will make you feel better about your situation. What is here is a toughness and an edginess that is missing from most modern music. This is life and all of the joys and sorrows that come with it laid bare and presented to the listener. No sugar and no artificial flavors, just the truth. That’s why, like Cash’s American Recordings, this album is as likely to appeal to metalheads or gangsta rap listeners as it is to country and roots fans. 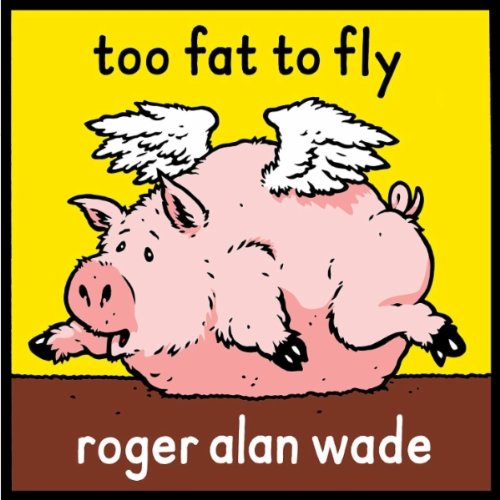 As I already mentioned, though, there is another side to Roger Alan Wade and even though Deguello Motel just came out late last year, he already has another new album out, a collection of novelty songs called Too Fat to Fly.

Kicking off with the title track, which is based on the dispute between Southwest Airlines and film director Kevin Smith, Wade trades in the bleakness of his last album for (sometimes irreverent) humor.

In what could be the companion to Johnny Cash’s “Flushed from the Bathroom of Your Heart,” Roger presents “You Turn the Key on My Rack Of Spam,” plays “Party in My Pants,” which was previously featured in last year’s Jackass 3-D, and wishes he was somewhere “Stoned Playin’ Pinball.”

The best moment of this brief album comes at the end with the masterful tune “The Sun Don’t Shine on the Same Dog’s Ass Everyday,” which, if you believe the story, was pitched to Cash, Waylon, Willie, Bob Dylan, Neil Diamond, and others, all in the hopes of Wade being able to afford a box of jelly-filled donuts. This track absolutely must be heard to be believed.

While Deguello Motel is the album that most music fans will own up to liking, in it’s own way Too Fat to Fly is just as great. It really all depends on what you’re in the mood for. The point is that whether he’s writing the dark and poetic tunes of Deguello Motel or “Psycho Bitch from Hell,” Roger Alan Wade is an American treasure and one of the greatest songwriters we have.