Beth Hart is a true force of nature who has been compared to singers like Janis Joplin and the late, great Etta James. She recently wrapped up a European tour with most dates sold out, and was voted the #1 Best International Vocalist for 2012 by the UK’s Blues Matters magazine. Hart just finished tracking a second album with Joe Bonamasa and is preparing for a second European tour and the April 2, 2013 release of her new album Bang Bang Boom Boom. She kicked off the project in a killer way: at the specific request of Jeff Beck, she joined the guitarist performing the Etta James classic “I’d Rather Go Blind,” in Washington, D.C. this past December to pay musical tribute to Buddy Guy, who received a 2012 Kennedy Center Honors award. I was lucky enough to grab a few minutes of her time to chat over the phone from her California home and have her share some insight about these exciting times.

Rick J Bowen: Hi Beth- Wow with so much going on: a new album, tour, the Kennedy Center honors and more, how are you holding up?

Beth Hart: I’m an old dog. I learned how to do this a long time ago and I don’t let anyone over work me. I learned it’s a rollercoaster ride full of ups and downs and I am up now so I am enjoying every moment.

RJB: Ok so tell us about the Kennedy Center honors performance with Jeff Beck.
BH: What a great night and Jeff, oh man what a great friend he is. We hooked up again when I did the Jools Holland show on the BBC. He called me a few weeks later and asked if I would join him for the show. It was so amazing going to D.C. and the White House for a State Dinner. I mean, the Clintons were there. And then I see Aretha Franklin, and I am just the biggest fan, there’s no way I can go and meet her: what if we have that awkward moment. I can’t believe I am even in the same room with her. But all these great people were there, I got to hang out with Tracy Chapman, and Zeppelin was there of course, and Bonnie Raitt, oh my god she’s the baddest mother fucker of all time. Then I had to go to the ladies room and they send you down the hall with portraits of all the first ladies, oh so amazing. You know there’s always a powerful woman behind powerful men. So then it’s on to the show and the pressure is on. But I was just meditating on the idea that none of us is better than anyone and we all have something to give. And I think “this is for Buddy,” and he loved Etta James. So it was magic, I am on this great stage with Jeff Beck and this great band and all these people. The most wonderful thing that has happened in my career so far; a real piece of Americana.

RJB: Let’s talk about the new album Band Bang Boom Boom, it runs the gamut of styles from blues, rock and soul to gospel and swing; any fear of it being too broad in today’s market?

BH: Well an artist must be willing to look like a schmuck, and challenge ourselves. My songs always come from an eclectic place; I have so many influences and love so much music. I love reggae and old school country and of course soul music like the Stax sound. When Joe said to me “let’s do a soul record,” we started listening to all these great songs and that was a big influence. I also got work with these great writers who pushed me into new styles and grow as a writer. The amazing James House co-wrote “Caught Out In The Rain,” and Juan Winans, what a privilege to work with someone who comes from that family. I finally got to work with Rune Westerberg for “Bang Bang” and “Thru the Window,” we did that one in two days and the demo we made is what made the album. We tried other passes but that demo had the right feeling.

RJB: Is it fair to say the theme of the album is love songs from a grown woman’s perspective?

BH: Yeah I’ll take that. The songs are about hope, love and joy, but it wasn’t premeditated. When I write, the music usually dictates to lyrics and it will remind me of a dream or something from my life. My last album, My California was very singer songwriter and came from a place of a lot of pain and turmoil. I write a lot on my iPhone using the little note pad while I’m out having a smoke, and one day looking at what I had been working I realized I was writing about uplifting things and about love. I give all the credit to my wonderful husband Scott who loves me so much. I was afraid for so long that I wasn’t good enough for him and didn’t know how to love him back, but a friend of mine told to just follow his lead and let myself learn how to love. 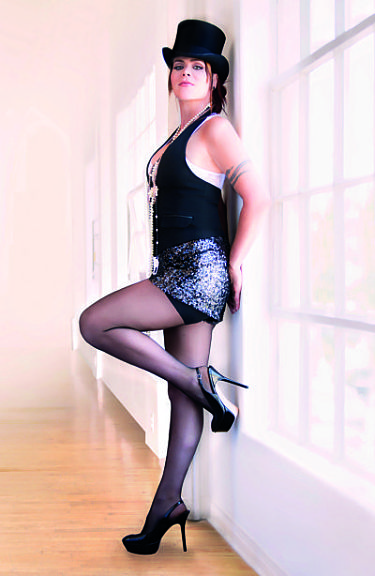 RJB: You have been compared to Janis and Etta as a singer, but you are also a piano player, so who else have you studied?

BH: Oh so many people, for piano number one is Beethoven. The changes and all the wonderful notes, he was the king. Then Thelonious Monk and I think Fiona Apple is brilliant. Oh and Little Richard, the first rock and roller he does not get enough credit for that. Then with singers, I could go on for days and days. Starting with Pavarotti, then Chris Cornell and Robert Plant, and Dylan and Neil Young I think are real singers of character who taught us you don’t need all the tricks if you have soul. Aretha Franklin of course it don’t get no better. But then I discovered Etta James live “Blues in the Night,” she is in a small club with only eighty or ninety people and a great band and showing us how to do it. She was bad ass.
RJB: You sound like Nina Simone reincarnated on the opening track “Baddest Blues,” she never got her due.

BH: (gasp) Oh my god I love you, love you. That is the best compliment ever. I love Nina. Yes she has been over looked, like Van Gogh, who never sold a painting in his life time. Nina just knew in her gut that she was doing was right even though it wasn’t recognized at the time.

RJB: You have worked with Beck, Bonamassa and Slash three of the best guitarists in the world, who‘s next?

BH: Oh I don’t know, but I’ll tell you what. All three of them have three things in common that sets them apart. They are humble, they work their asses off, and they are team players. They all have amazing talent but they practice and polish it all the time. They all have a great work ethic, but know it’s not all about them it’s about doing it right. People like that know how to surround themselves with talented people who will push you.

RJB: Can you give us a sneak peek into the new Joe and Beth album?
BH: Yeah sure, we finished just last week, tracking in just three days. We did Bang Bang in six days. I love, love, love recording like that, just get in and run it down a few times and get out, very live with all the mistakes. I think little mistakes can become a part of the song and reflect how we are as human beings. And you should be proud of them, like a punk rock bad ass thing. Anyway, so yes it’s me and Joe again of course who is just a doll face, and the wonderful Carmine Rojas on bass guitar and Blonde Chaplin and of course the amazing Anton Fig on drums. There songs from Nina Simone and Tina Turner, a first for me, and one from Lucinda Williams. We recorded fourteen songs and will pick the top ten for the album.

RJB: And you are off to Europe again this week.

BH: Yes, yes, I am doing the Marie Osmond show this Thursday; it’s so great I watched the Donny and Marie show as a kid. Then off to my wonderful Europe. Europe has given me a life and a career. So excited we will be in twelve countries, several I haven’t been to before. Ireland and Scotland and Italy and then I’ll be back in April to do the Crossroads festival with Jeff Beck, and the states in summer.

BH: Yes and do come backstage to say hello.