0
0
Shares
Never will I forget that night last May when the merciless rains began pounding Nashville, dropping a record month’s worth of rainfall in less than forty-eight hours. The thunder and lightning would periodically subside, but the water never quit pouring from the sky. The puddles in my front yard soon coalesced into a large pond. The gentle hill in front of my house carried wild, rushing water across my lawn and driveway, looking more like a rural river than the inner city neighborhood it was devouring. My basement eventually had five feet of standing water inside it, but I was one of the lucky ones. Thousands of others lost everything, with only the roofs of their homes visible above the brown, murky floodwaters. The rebuilding process is still very much in place today. Mike Farris titled his new EP The Night the Cumberland Came Alive, referencing the overflowing Cumberland River that snaked through Nashville drowning countless homes and businesses that calamitous May night. The EP was released under the name of Mike Farris and the Cumberland Saints. Part of the proceeds from the album will go towards helping flood victims. That’s not the only reason you should buy it, though. You should grab a copy because it is some of the finest roots-rollicking soul and gospel you’re likely to ever hear.
Mike Farris is damned hard to classify or even get one’s head around. His music has the spiritual intensity of a church choir from the Mississippi delta and all of the low-down grittiness of the juke joints attended by their congregation the night before. When Farris belts out a tune, it’s hard to believe that such a big, rich voice emanates from the body it inhabits. Perhaps that’s fitting, given that so much of his music is concerned with a place beyond our earthly bodies. Farris spent much of his life battling the demons of drug and alcohol addiction before a religious transformation overtook his life. From the gloriously raucous sounds of this EP, I wonder if he wasn’t baptized in something like the wild rapids of last May’s Cumberland floodwaters. 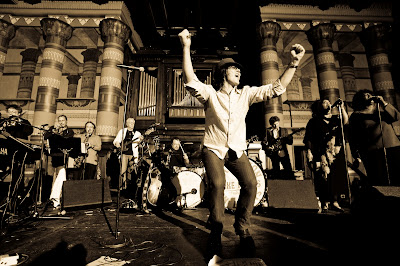 The “Cumberland Saints” backing up Farris include Sam Bush, Ketch Secor and Gill Landry of Old Crow Medicine Show, and gospel royalty, the McCrary Sisters. The six-song album was recorded in an afternoon in Nashville’s Downtown Presbyterian Church only weeks after the flood. The recording exudes the warmth and passion of a live show, more like a tent revival than a studio session. The first tune and title track is a mid-tempo, bluesy number written specifically about the flood. In addition to Farris’s glissando-infused singing style and the McCrary Sister’s exalted backing vocals, Sam Bush’s bluesy mandolin offers some stand-out accompaniment. With the chorus, “I will remember the night the Cumberland came alive, it should remind you that you were born to die,” Farris turns the story-song into a gospel-tinged lament.

In the tune, “Wrapped Up, Tangled Up” Farris uses a fishing metaphor to describe being called to his faith. After an extended introduction, the song settles into another gospel blues number with a lively piano, meandering harmonica, honky-tonk guitar riffs, and a driving mandolin chop. When Farris sings “Jesus got his hook in me, and I don’t want to get loose,” there might be enough soul to inspire shouts of “Amen!” from Bill Maher, Richard Dawkins, and Christopher Hitchens. 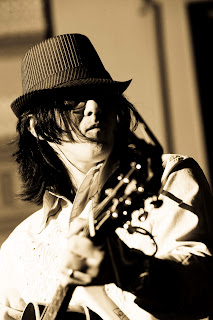 Religious references persist throughout the album (much like Farris’s 2007 Salvation in Lights). Farris celebrates his faith while placing it firmly in the enduring roots traditions of the working class, rural folk, and worship music of the dispossessed and embattled. The result is an intoxicating stew of joyous shouts, earthy rhythms, and a sound that makes palpable a desire to transcend one’s mortal self. Such is the case with “Down On Me,” a boisterous and howling cut in which the singer seeks salvation amidst troubled times. “Dear Lazarus,” penned by Farris and OCMS’s Secor only days before the recording, was also composed loosely within a traditional gospel framework. It begins with a mournfully bowed fiddle that builds into an up-tempo shuffle and swings its way to a driving spiritual stomp.


“Mother Earth” has an early 20th century feel with its stride piano bouncing out a solemn walking bass line only to give way to sweet vocal harmonies that breathe an enlivening warmth into the rootsy ballad. The final track of the album ends with “Don’t Let the Sun Go Down” which has a decidedly New Orleans flair. This is an especially fitting closing, given that New Orleans must be the spiritual and musical reservoir from which Farris draws much of his funky, syncopated roots cocktail.
The gospel soul served up by Farris and the Cumberland Saints is a high-proof intoxicant that should come with a warning label: “May Result in Involuntary Convulsions, Consume with Caution.” Even though the floodwaters have receded, you can still wash away your sins with some great music while supporting a very worthy cause.

(I hope to have an interview with Mr. Farris posted later in the week; stay tuned…)