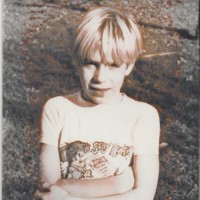 Joliet, Illinois-based freelance writer and singer/songwriter Ted Slowik is a storyteller with a heart and a healthy sense of humor. As a writer, he has more than 30 years experience in journalism and public relations, including stints as managing editor of a daily newspaper and correspondent for the Chicago Tribune. As a performer, Ted shares a passion, intensity and energy with audiences. Whether performing as a soloist with his acoustic guitar or accompanied by a variety of musician friends, Ted delivers an entertaining and enjoyable show. Tom Lounges, music writer for The Times of Northwest Indiana and host of show on Lakeshore Public Radio, picked Ted's solo debut "Comfort Zone" as among his Top Ten Albums of 2014. He played bass for 30 years in various blues and rock bands but has focused on playing acoustic guitar since 2011.

It’s hard to believe it’s taken Kev Wright 61 years to release his solo debut. After all, the Chicago-area guitarist has been a full-time musician for many of those years. He’s performed and recorded with bands and established a reputation for […]

Change is constant, and those best able to adapt to change are most likely to survive. Two musician/producers both named Paul Brown are rolling with the changes and proving baby boom-era types can create relevant Americana music today. “Dusty Road” […]

Paul Brown, the Grammy Award-nominated Memphis/Nashville producer and keyboardist, describes his new album with his wife as an artists’ journey together through the cancer landscape, with songs intended to create peace, joy and hope. But at its heart, Elders and Ancestors is […]

If seasoned troubadour Jeff Givens had written “make a kick-ass rock record” on his bucket list, he could now cross that off. The drummer-turned-singer/songwriter has self-released his second full-length, Midnight in Muscle Shoals. The basic tracks were recorded by John Gifford […]

Guitarist Kev Wright announced this week that he has parted ways with The Righteous Hillbillies, the band he co-founded eight years ago with Brent James. In a Feb. 11 Facebook post, Wright said “with a heavy heart” that the split was […]

Good things are worth waiting for, especially debut solo albums nearly a decade in the making. Nine years after her band Stone City Stragglers delivered its third and final album, Allison Flood has released her solo debut on the Flipside […]

Growth can be a remarkable thing. In a relatively short amount of time, talented artists who work hard, make wise choices, and remain true to their vision can flourish in stunning fashion. Such is the case with Joliet, Illinois-area songwriter, […]

9 Steps to Becoming a Better Musician, Performer, and Artist

I’ve learned much in nearly 50 years as a hobbyist musician and about 35 years as a songwriter. Remarkably, I feel I’ve learned more about making music in just the past three years than all of the previous ones combined! Three […]

Original about the Slowik family’s 12 children. Dad grew up in Michigan In a place called Jericho It was just a few miles from the Warren Dunes They got grea…