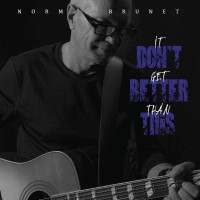 Norm has long been a part of that elite group of artists, a gifted songwriter, an accomplished musician, and adding to his triple threat credentials are the always on target and distinctive vocals. â€œThe first thing people usually comment on is the raspiness of my voice. I guess that came from years of performing night after night in clubsâ€! Normâ€™s Smokey-throated vocal work has a special attractiveness that keeps you listening for more. His voice rings with experience and texture. We are at ease with a vocalist who doesnâ€™t need to struggle to emote. As a songwriter, his versatility comes to the forefront with an intuitive ability to take everyday situations and turn them into songs, not just lyrics on paper or grooves on discs but observances of life! Larry Delaney â€“ Can Country â€œHis tunes are exceptional! Substance? Plenty, Hooks? Norm could open his own tackle shop!â€ Susan Beyer â€“ The Ottawa Citizen. Raised and living in Canadaâ€™s capital Ottawa, Normâ€™s artistic ability was evident at an early age. He started playing guitar at the age of nine and over the years, the two became inseparable. With a diverse appreciation for music, Norm counts among his many influences that country tinged southern rock sound of the Eagles, Poco, the Birds as well as Bob Seeger, John Mellencamp to name but a few. â€œI identified with that sound. It grabbed me the first time I heard the music, especially the guitars and harmony vocals!â€ With years of roadwork here and abroad, Norm honed his skills both on stage and on paper, writing regularly and performing hundreds of shows a year. With two previous critically acclaimed albums, â€Me & My Guitarâ€ and â€Life Goes Onâ€ both of which charted several singles on the various country music charts in Canada, Normâ€™s new album project, â€It Donâ€™t Get Better Than Thisâ€ is true to his signature style of writing, some Traditional Country some Country Rock and good dose of Americana Roots!

NORM BRUNET – IT DON’T GET BETTER THAN THIS! He’s back !!!…. Well actually he never went away. Like most country singer/ songwriters who made an im- pact with their songs and recordings during the pre- Garth and Shania heydays […]