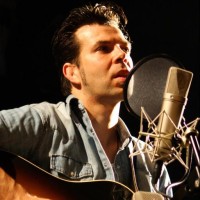 "If you like boys bands you'll hate @markusrill but if you got a few scars & some wild blood in your veins ... you'll most likely dig him." - Ray Wylie Hubbard

"Rill shows great depth as a songwriter, bandleader and producer" - No Depression/USA

"If voices were highways, Markus Rill's would be gravel ... like Steve Earle, Tom Waits and Lucinda Williams, Rill excels at songwriting" - PureMusic/USA

"Song-writing at its very best. Rill has the knack of inhabiting all of the characters in his narratives, making the listener вЂbelieveвЂ™ in the stories. Fabulous tunes and a voice that sounds like it comes from the Americana heartlands." - Maverick magazine/UK

Why must fate be such a fickle thing? – Solo performance of a song that appears on “Late Night Drive”. More info at http://www.markusrill.net, Download option at http://markusrill.bandcamp.com

Markus Rill & The Troublemakers played on Friday, Sept 14, in their hometown of Würzburg/Germany. Here’s The Kid From Tupelo, a song from their current album “Wild Blue & True”. This song was a finalist in the International Songwriting Competition. You […]

Way Down up in Sweden

At the wonderful Songwriter Festival in Visby I enjoyed sharing the stage with friends. Here’s an impromptu version of Way Down with Annika Fehling – who organized the festival and wrote the song with me – and my friend A.P. […]

I promise to love, honor, cherish & obey the Bob so long as he shall live.In honor of the songwriters’ patron saint (except he ain’t no saint), here’s my take on Not Dark Yet as a free download – only […]

A good time to write

One of my favorite times to write is when I’ve just finished an album and am waiting for it to be released. You may think it’s a time to relax after all the very focused work that goes into the […]

The Kid From Tupelo

Hi guys, so I’m a huge Elvis fan. A few years ago I bought every Elvis video I could find. No, not the movies but live videos. My favorite and one I wholeheartedly recommend is That’s The Way It Is, […]