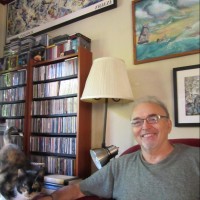 Kevernacular (Kevin Lynch) is a veteran, award-winning arts journalist, educator and visual artist. He won The Milwaukee Press Club's 2013 gold award for "Best Critical Review of the Arts" for my Culture Currents blog "Edward Curtis Preserved America's Vanishing Race for Posterity." The Aug. 22 posting reviewed a photo exhibit at The Museum of Wisconsin Art by Curtis, who documented the passing of America's original Native American culture and society in the early 20th century.

He was a long-time staff arts writer for The Capital Times in Madison and The Milwaukee Journal, where he was lead writer of a Pulitzer-nominated Newspapers in Education project called "That's Jazz."

Among other publications, he's written for Down Beat, The Village Voice, The Chicago Tribune, New Art Examiner, Rain Taxi, American Record Guide, CODA (The Canadian jazz magazine), Wisconsin Natural Resources Magazine, Scene PBS TV magazine (Minneapolis), Graven Images: A Journal of Culture, Law and the Sacred; The Shepherd Express, OnMilwaukee.com and he has been a featured blogger on roots music for NoDepression.com. He's taught cultural journalism, English rhetoric and composition (while earning half of the credits for a PhD. in American Literature), and film studies. He served as a music program host for WLUM-FM and WMSE-FM in Milwaukee. He's also  working on a novel, Melville's Trace or, The Jackal. Kevin is a also a visual artist and studied jazz piano and theory at the Wisconsin Conservatory of Music. A recent hand disability keeps him from piano playing these days. He lives in Milwaukee.

STATEMENT: In blog writing and reporting, I strive to maintain and espouse the same journalistic standards of professionalism cultivated in over 30 years as a working arts journalist. Given the freedom of the blogosphere, misinformation compounds and spreads at an alarming rate. So, maintaining such standards is more important than ever, even as I welcome the new freedom and vibrancy.

My blogger's moniker suggests a particular hybrid quality as a cultural observer. My sense is that meaningful distinctions between fine and vernacular art blur in the cultural currents -- aside from functional genre names. I've covered and researched both realms plenty and categories help identify and clarify -- fine vs. folk vs. pop art -  but there's no hierarchy of quality among genres or traditions, in my mind. As Duke Ellington said, "There's two kinds of music, good music and bad music."

"Vernaculars speak" implicitly nags the old culture-class question of, say, who's better: Bob Dylan or Dylan Thomas? Pop culture poet/songwriter Bob Dylan is taken seriously today by intelligencia, of course -- almost to death. But I think that beyond Bob, and because of him, the craft and art of songwriting has spread and grown almost exponentially in many vernacular idioms, often in new hybrids. And that phenomenon is important and noteworthy.

Milwaukee-born, Nebraska-based jazz singer Jackie Allen is on a sky-kissing peaking career arc. Though still possessing far more talent than renown, her new album tops her previous, which I’d considered her best.  Dawn is more personal and artful, yet […]

In This Case, Lesser Lakes is More

Lesser Lakes Trio – The Good Land (Shifting Paradigm) Lesser Lakes Trio is a quietly intriguing, even enchanting conceptual music trio that seems both of the land and above it, like a cloud , or a broad-limbed tree, or a hovering […]

A capacity crowd recently at bucolic Villa Terrace for his debut CD-release celebration and Father Sky itself are testament. Young Milwaukee pianist-singer-composer Anthony Deutsch has old-soul wisdom and gifts for speaking to people about matters of the heart, and of the mind/body […]

Steve Earle continues to amaze with the depth of his musical and songwriting talent, his passion, righteousness, and intellect. Especially the way he often weaves these things through any given song. He’s also a rare bird for his self-described working-class “redneck” […]

Record Store Day: Hunt No. 1, Sweet Rain The sun greeted Earth Day morning 2017 with warm benevolence and I imagined maybe, just maybe, I could “do it all” today, as my dear paraplegic friend Jim Glynn used […]

Oblivion: The Music of Bud Powell – Tim Whalen (WayHay Music) The Tim Whalen Trio will perform on Thursday, April 6 at The Jazz Estate in Milwaukee. “Oblivion,” the title of a Bud Powell tune, might be the single best […]

In honor of the Irish holiday, the memory of Van Morrison’s great Irish record

Something in the wind from the brooding clouds sent a shiver of melodic memory through me this afternoon. It’s St. Patrick’s Day and the song in the air seemed to nudge me with quiet insistence, as if to say, “How […]