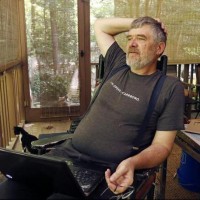 Art Menius received both the B.A. (1977) and M.A. (1982) in history from the University of North Carolina at Chapel Hill. Following three and one-half years as an Interpretations Specialist for research at the North Carolina Department of Cultural Resources, Menius entered the music field as a writer and production assistant for the Nashville Network bluegrass and old-time music series, â€œFire on the Mountain.â€ In September 1983 he began publishing about roots music for publications ranging from Bluegrass Unlimited to the [Raleigh] News & Observer. Other adventures along the way have included editing and desktop publishing books for the Forest History Society, promoting a live performance bluegrass radio series on 117 commercial stations, emceeing and stage managing at dozens of music festivals in USA and Canada, and serving as a consultant on the acclaimed film, â€œHigh Lonesome.â€

During 1985 Menius helped create the International Bluegrass Music Association and became the new trade associationâ€™s first executive director. In 1990 the North American Folk Music & Dance Alliance elected Menius the President of its first board of directors. In April 1991 he became its first manager, serving in that capacity until June 1996. Menius became Associate Festival Coordinator for MerleFest, the enormous outdoor folk festival presented by Wilkes Community College in Wilkesboro, NC. Following a decade there, Menius served as Director of Appalshop, the acclaimed Appalachian media and arts center in Whitesburg, Kentucky from July 2007 until March 2010. On November 2, 2011, Menius completed his work as Director of Development for Common Ground on the Hill. He returned home to central North Carolina as Executive Director of The ArtsCenter on April 10, 2012. On August 31, 2014 he retired from that position to write a history of American localism and work as a freelance non-profit, fundraising, marketing, and music career consultant. He hosts â€œThe Revolution Starts Now: The Topical Song Showâ€ on WCOM-LP 103.5 in Chapel Hill and Carrboro (wcomfm.org for streaming) each Tuesday at 4PM Eastern and writes a monthly column for the News and Observerâ€™s Chapel Hill News.

By Art Menius for artmenius.com 2/28/2012 Last week brought another Folk Alliance International Conference, the last of a six year cycle in Memphis, Tennessee. Next year brings Toronto, then five years in Kansas City, Missouri starting in 2014. I started […]