0
0
Shares
Donna Beasley has been one of Nashville’s best kept secrets for years.  After the release of her 2010 album, “Under The Rushes”… the secret is out of the bag.  “Under The Rushes” – Beasley’s second album, has received scores of great reviews from critics across the country as well as those from the foreign press.  With a supporting cast that includes Chuck Mead, Elizabeth Cook, Kenny Vaughan, Tim Carroll, Bob Britt, as well as her producer/ guitarist/ husband, Tom Spaulding- Beasley has taken her already impressive songwriting to another level.
I recently sat down with Donna to talk about her upbringing, songwriting, the process of recording her album and the story behind “Donnaroo.”
T-Bone:  I know you were raised in a strict family that looked down upon rock & roll music, when did you realize you wanted to be a performer and how difficult was that?
DB:  There was always music in my house. My mom sang and played guitar in church. It seemed natural that I would make music at some point. And that was the thing…I knew I had to be one of the people who MADE music. Being a fan wasn’t enough. I was raised on country music and some bluegrass. Later on, my older brothers turned me on to rock and I became a rock chick! A defining moment for me was the first time I saw Pat Benatar on t.v. She was the first female front woman who clicked with me. I never thought such a thing was possible until I saw her. It’s like all the musicians who talk about seeing Elvis or the Beatles on t.v. when they were a kid and saying “THAT’S what I want to do!”

But it was also around that time that everyone in my family, with the exception of my dad, starting going to the fundamental Baptist church. And my brothers wanted me to go to the Christian school inside the church. So I was out of public school 8th grade on. My brother drove a church bus. I sang at our church as well as others. We were immersed in it. I was there for school, church services, visitation, what have you, basically 7 days a week. And this was a “women don’t wear pants, it’s a sin to go to movies or listen to rock and roll music” sect of Baptist. So, once I did start singing and people believed that I had a gift or talent or whatever, the ambition I had of singing secular music was looked upon as a sin. My mother told me that God would never let me be successful unless I sang His music. I remember singing a rock song around the house and one of my brothers getting so MAD at me!

I was torn between being a messenger of God through this talent He had given me and between wanting to sing the kind of music that I liked listening to. And it devastated me that people thought the desire I carried to do that – to make music – was sinful. It took me years to get over it. I still don’t talk about the fact that I sing in bars with my family. Putting on a pair of jeans and taking the stage of a club is a monumental rebellion for me.

T-Bone:  You started singing fairly young, but didn’t write your first song till you were 30.  You now get praised for your songwriting, how did that come about?
DB:  I tried writing when I was younger and it was really bad! I recognized that it was bad and that I didn’t know how to do it. So, I gave up on it. But I always knew  – even as I was in college taking creative writing classes – that someday I would write songs. So, I tucked away little ideas, thinking “someday I’ll write a song about this.” The title track from my latest record was one of those ideas.

Even though I had plenty of angst to write about when I was younger (I grew up in the typical southern home with a full mix of religion, alcoholism, violence – something for everyone), it still took some growing up, getting my heart broken a few times, having dreams dashed, all those adult things, before I was able to write songs. I was divorced, killing myself in graduate school plus working, living on my own 500 miles away, going through a particularly hard romantic break-up, and listening to a lot of Cranberries. I guess it all melded and meshed in the right way because that’s when started writing songs. Most of them were still bad. But I had a sense of “hey, I can do this and get better at it.”

By the time I had moved back to East TN, I had decided to learn how to play guitar and to start singing in public (but not church – my family had loosened up a lot by then and they were ok with it). I thought my voice was kinda weird and I didn’t sound good singing just anything. So, I figured I’d better write my own songs so I’d have something to sing. Considering what an undertaking both songwriting and guitar playing ARE, I am amused by my naïveté. But thank goodness for periods of blind optimism. We get fewer of those the older we get.

T-Bone:  What can you tell me about Appalachian Fusion Music?
DB:  I was exposed to so many different kinds of music as a product of a musical household and a child of the MTV age. And that comes out in the various styles of songs I write. But people tell me that I still sound “East Tennessee.” So, even if I aspired to, I don’t think I could be Lady Gaga or whoever. There’s too much of a regional sound in the tone of my voice to not call it “Appalachian” something!
T-Bone:  You’ve had a lot of great reviews for “Under The Rushes”- including one that compared your songwriting to some of Nashville’s best.  How does that make you feel?
DB:  I’m always pretty hard on myself. So, I feel like I’m not near the level I WANT to be as a songwriter. But I’m hoping I’ll get there. So, while I’m flattered by the comparisons, I’m still striving. Sometimes I don’t think I know the first thing about writing a song.
T-Bone:  What was the process like for your last album?

DB:  Well, generally artists write a bunch of songs and eventually have enough decent ones to say, “I think I’m ready to make a record.” That’s how it starts out. In our process, we did more pre-production for this record than the last. That was partly because some of the songs had kinks to be worked out. So, we made laborious demos where we worked out drum sounds, guitar parts, vocal arrangements, etc. We passed these off to the musicians, inviting them to override our ideas any time they had better ones. The importance of bringing in talented, engaged musicians and encouraging their input cannot be overstated.
We went into a studio on Music Row and recorded the basic rhythm tracks of drums/bass/guitar in a day. We had recorded a few songs earlier in our house with a full drum kit set up in the living room, a bass player in the hallway, me singing scratch vocals in the bedroom…it was chaos!! Our house is not that big! But the basic track of “You Wouldn’t Know Love” survived the chaos and made it onto the record. We learned from that experience that there is no substitute for making a record in a real studio that was built just for that purpose. It sounds better and is way easier logistically.
Once we had the basic tracks, we went back into the studio one other time and cut piano, fiddle, dobro, and a couple vocals. From there, we recorded most of the overdubs at our house – guitar parts, pedal steel, more vocals. Some vocals were recorded at Anthony Aquilato’s house. Phil Madeira did his accordion and B3 parts at his house. Steve Cox did B3 at his house. Michael Webb’s keyboard parts were recorded by Tom on the road when Michael was playing and Tom was tech’ing for Leann Rimes’ band.
Some of the mixing was done by Tom at our house, some by Tom and Steve Ledet at Steve’s in-home studio. So, yeah, this is how modern records are made. Artists financing their own projects, people working for reduced rates because it is a labor of love or because they need experience or album credits. Everyone is making their money some other way and doing THIS because they love it and it keeps them sane. 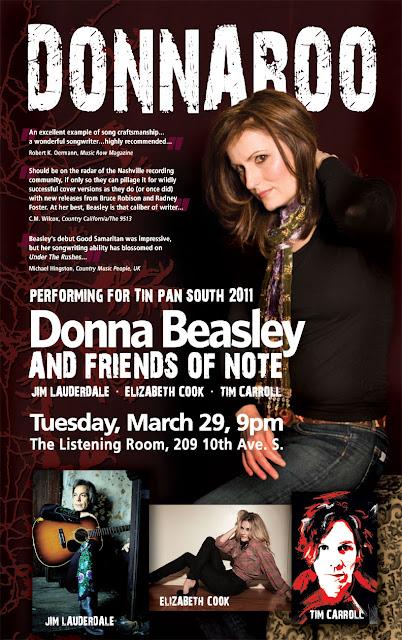 T-Bone:  Tell us about your upcoming Tin Pan Alley South 2011 gig and how you came up with “Donnaroo.”
DB: Donnaroo! In putting together a team for this year’s Tin Pan South, I thought of it like a festival I was hosting. And if I held my own festival, who would I want to play it? I am so excited to be sharing a stage withTim Carroll, Elizabeth Cook, and Jim Lauderdale.We’ll be playing at The Listening Room, Tuesday March 29 at 9:00pm.
T-Bone:  How do you see the role of the internet when it comes to the future of music?
DB:  The good thing is that everyone can get their music out there. The bad thing is that everyone can get their music out there. So, the challenge becomes drawing attention to yourself. For that reason, artists still need “help” – management, marketing/distribution, a booking agent, publicist, radio promoter. But when you’re financing your own career, spending $10,000 on a publicist may not be an option. So artists have to get creative. Bands have been broken on YouTube and MySpace. Most artists have some level of involvement in the social media sites. But there’s still no substitution for building a following the old fashioned way – by playing live in front of as many people as possible. By finding the small radio stations out there who play independent artists. Even the YouTube and MySpace phenomenons have started with just a few people checking them out, thinking their cool, and then telling their friends. So, essentially that’s where it stands NOW and I have not even attempted to answer the actual question of where I think it’s all GOING. I don’t know. It’s a big world out there. But for me, there’s no substitute for holding a great cd or album with beautiful packaging in my hands or for watching a live show by my favorite artist.
T-Bone:  Donna Beasley has to take a 3 hour trip across the state, which CDs does she take along for the ride?
DB:  In no certain order:
Shelby Lynne, “I Am Shelby Lynne”
Emmylou Harris, “Wrecking Ball”
Neko Case, “Fox Confessor Brings the Flood”
Red Hot Chili Peppers, “Blood Sugar Sex Magic”
Dwight Yoakam, “This Time”
Jim Lauderdale, “Patchwork River”
Elizabeth Cook, “Welder”
Tim Carroll, “All Kinds of Pain”
T-Bone:  What can we expect from Donna Beasley in the next year or two?
DB:  More shows, more songs, another record. Continuing to look for opportunities to get my music to a larger audience. Find more people who dig what I do. Onward, and hopefully, upward!
DONNA ON THE NET:
donnabeasley.com
facebook.com/donnabeasleymusic
myspace.com/donnaebeasley
Photo Credits: Both photos are by Pierrette Abegg.
Poster Design: by Nancy Hagen, GraphicNashville.
This interview also appears on my site:  http://www.tbonesprimecuts.com
0
Shares