I have said it before and I’ll keep on saying it ‘I love going to house concerts!’

The audience for this one had travelled from near and far to spend an evening in the company of Anna Coogan and Daniele Fiaschi. The pair, whose new album THE NOWHERE, ROME SESSIONS has been garnering some wonderful reviews, had initially planned to play one long set however with a number of guests bringing desserts to share, they decided that it would be appropriate to have a break in the middle to try said desserts (!) and revised their set list accordingly. A decision, which, no pun intended, went down well – we house concert going people just love the combination of food and music!

The first set opened with Back To The World and that set the tone for the remainder, featuring as it did, eight songs from the new album. Coogan, originally trained as an opera singer so was quite at home singing without a microphone. Her voice no longer shows her operatic training but she revelled in the opportunity to fill the room with the purity of her vocals. All save one of the tracks on the album were recorded over a weekend with hardly any post-production editing and to hear them sung and played in this setting was as close to the recorded versions as one could hope for. Fiaschi, on guitar, lent such sympathetic accompaniment that it was easy to just sit back and lose yourself in the beauty of their collaboration. One of the covers on the album is Gordon Lightfoot’s The Wreck of the Edmund Fitzgerald a true story about the sinking of the ship in which twenty-nine lives were lost in 1975 on Lake Superior. Coogan sings with such expression and depth of feeling that the she makes the tragedy sound so personal.

The second set featured older songs from Coogan’s back catalogue – Mockingbird, State of Grace as well as a cover of the traditional folk-song Shady Grove. The highlight of this set was a cover of Phil Ochs’ The Crucifixion. Finishing the set with Come the Wind, Come the Rain (most apt given the wet Autumn weather being experienced) they returned for a couple of encores before taking their final bows.

Coogan and Fiaschi were new names to me; I can safely say that I’m so glad I’ve found them and very much look forward to their next UK visit regardless of whether it includes dessert or not! Jela Webb 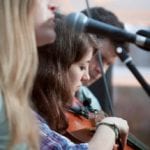