And the Winner Is … Steve Earle: The Warner Bros. Years

Several posts ago I wrote on how I had entered a contest to win a signed copy of  ‘Steve Earle: The Warner Bros. Years’ box set courtesy of No Depression, the Americana, alt-country and roots music authority since 1995.  My entry was:

“Asking a Steve Earle fan to pick his favorite song is akin to asking a parent to pick their favorite child but what the hell here goes:

I am partial to “I Feel Alright”. The opening verse of “…Now some of you would live through me Then lock me up and throw away the key Or just find a place to hide away And hope that I’ll just go away Huh…” is autobiographical but also speaks to the generations of incarcerated  in this country for nothing more than a health problem aka drug addiction.

I saw one of Steve’s last shows before he reported to prison (he warmed up for Los Lobos at First Ave in Mpls) and he was looking and sounding pretty rough and who could blame him.  Which is why Steve is an inspiration to me;  for taking control of his life, learning from his mistakes and for working for unpopular causes.  Truly a great  songwriter and musician but even a better man.”

Truth be told, I had alot more to say, especially on the issue of the futility of controlled substance laws in the United States and the perversion and corruption of the criminal justice system by civil forfeiture laws.  For once, however, I listened to the little voice in my head that kept telling me to keep it concise.

Well they say a picture is worth a thousand words… 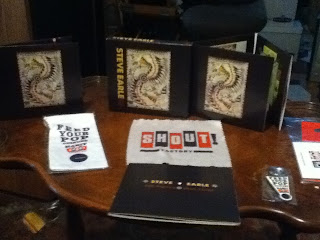 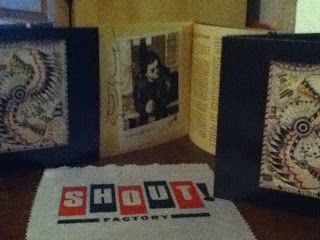 This is a beautiful box set consisting of 4 audio cds, a dvd of Steve and the Dukes performance at the Cold Creek Correctional Facility in 1996 as part of his probation on drug and weapons charges that sent him to prison for nearly a year.  The Shout Factory has done an excellent job in executing the final product and it is well worth its retail price, whether you are already a die-hard Steve Earle fan or as an excellent way of getting to know one of the most talented, provocative and intelligent singer songwriters of his generation.

The incredible liner notes by former Baltimore crime beat journalist and co-creator of “The Wire”, David Simon,  made me glad I refrained from my standard epistle, as a criminal defense lawyer with 25 years experience in controlled substance defense, on this country’s drug laws in my contest entry.  As someone who refuses to pay for cable television,  I became aware of Simon and his cable series first through print media reporting on the series, its excellent choice of soundtrack music (e.g. the Nighthawks, Steve Earle,  etc.) and later through his advocacy work on America’s broken drug laws.

Simon’s wonderful liner notes gives you a real feel for Mr. Earle, not as some kind of American hero, but as a fallible human being, self taught intellectual and incongruously, a Texas-transplant Yankee fan.  Coming on the day that my Twins finally broke their 2013 losing streak versus the Yankees and the fact that Simon recalls the story of his attending a Twins-Orioles game at Camden Yards, a game the Twins won by the way, is sweet serendipity indeed.  Simon’s liner notes, alone, are worth the price of admission.

Special thank you to Kyla at No Depression.