When you can lay claim to being the longest running music television show in America, it seems only fitting that you create a hall of fame to honor those that have been apart of it. Over the course of 41 years Austin City Limits has not only earned its place as a cornerstone in America’s musical legacy, but also as a leading source of exposure and documentation of incredible musical talents. Started last year, the Austin City Limits Hall of Fame “recognizes both performing artists and special individuals who have been instrumental in making the long-running show a music institution”. On Thursday night, supporters of the show gathered at the Moody Theater – also where the show is filmed now – to award and pay tribute to this year’s round of inductees, a heavy-hitting bunch of legends to say the least.

Partly an awards show but mostly just a musical celebration, the evening was hosted by country veteran Dwight Yoakam, himself an ACL alumni having played the show twice in 1986 and 1989. Ever suave, Yoakem MC’d with country class, schmoozing the crowd and joking when he flubbed his monologues off the teleprompter. Adding a soundtrack to the evening and backing a handful of the performers was a house band led by Lloyd Maines, who was among the first class of inductees in 2014.

The first award of the night went to the Queen of Country Music, Loretta Lynn, who wasn’t present but was viewed in a video segment receiving her award at the Texas’ oldest dancehall Gruene Hall. Paying tribute was Patty Loveless, who gave her own impressive crooning to classics like “Coal Miner’s Daughter”, “Don’t Come Home A Drinkin’”, and a duet of Conway Twitty’s “After The Fire’s Gone” with Vince Gill, who stumbled over lines but still added a nice touch. Lyle Lovett stepped up next to accept the award for Guy Clark, who was hospitalized just before the show. Lovett cited Clark as a friend and influence before giving his smooth, delicate vocals to an emotional “Step Inside This House” and “Anyhow I Love You”. Jason Isbell followed with what is perhaps the Texas songwriter’s most well-known song, “Desperados Waiting For A Train”, his smoky voice sounding like it was made to sing that song. Along with a “Black Diamond Strings” enhanced by the proficient picking of Dave Rawlings, Isbell was a major highlight of the show.

Accordion master Flaco Jimenez received a standing ovation when he accepted his award and blissfully joined Los Lobos’ David Hidalgo and conjunto rockers Los Texmaniacs for “He’ll Have To Go” and a rousing “Ay Te Dejo San Antonio”. Dwight Yoakam jumped in to lead the band on “Carmelita”, “Streets of Bakersfield” and the hauntingly beautiful “Buenos Noches From A Lonely Room (She Wore Red Dresses)”.

The best speech of the night came from Gillian Welch, who shared her personal memories of crossing paths with the late Townes Van Zandt years ago in Nashville. Welch brought out Dave Rawlings for what may have been the finest performance of the night covering “Tecumseh Valley” and “Dollar Bill Blues”. Welch’s take on the songs was powerful enough to make the venue feel intimate. British singer-songwriter Laura Marling brought a charming, youthful spin to “Colorado Girl” before Townes’ son JT – who bears a striking resemblance to his father in appearance and voice – played a version of “Nothin’” that would have made his old man smile.

Vince Gill returned to the stage to present the final award to Asleep At The Wheel’s Ray Benson. The two old friends cracked jokes before the western swing revivalists played light-hearted favorites “Miles and Miles of Texas” and “Route 66”. Gill stepped in to lend his mandolin picking to the Bob Wills classic “Take Me Back To Tulsa” only to be followed by Lyle Lovett leading the band in “Blues For Dixie”.

The night culminated with all of the musicians filling the stage and paying one more tribute to Townes Van Zandt with an all-star rendition of “White Freightliner Blues”. In the spirit of Austin and the television show, the night felt relaxed and fun without the stuffiness and showmanship of a typical awards show. Like Austin City Limits itself, the night was, at its core, all about the music. The ACL Hall of Fame may only be in its second year, but it’s a tradition already and one hell of a fun time. 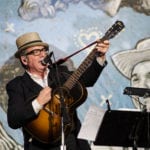 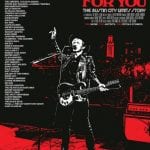