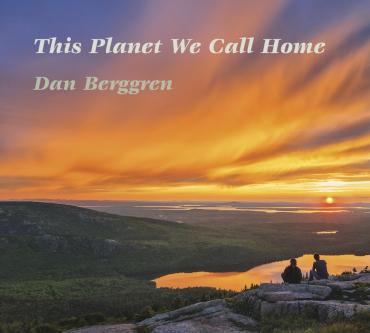 This Planet We Call Home

“Dan is a throwback to the old role of the folk singer  . . . he’s articulating things that need to be said right now.” – author Bill McKibben

One of the most pleasant CDs to come across my desk in the past few years is Dan Berggren’s latest, This Planet We Call Home.  Long considered one of Deans of the Adirondack school of singer/songwriters, Dan has been performing since the early 1970s. Growing up on a farm in the harsh Adirondack Mountains in Northern New York, his music has taken him half way around the world.  He’s performed around Europe, Africa, and throughout the US, while recording and producing solo and collaborative musical projects.  He’s stood shoulder to shoulder with the greats of folk music; people like Pete Seeger.

As a song writer, Berggren is meticulous in his stringing words together.  He doesn’t waste words, and his themes are well studied.  His rich baritone voice gives off an air of purpose, tempered by humor and compassion. Sounds are distinct and sharp. The accompanying music is delightfully layered without self-indulgent embellishment.  Full to the brim, but with no wasteful overfill.

This Planet We Call Home is 18 songs, mostly focused on the mountains, lakes, and villages of the Adirondack Park, but universal in their application.  Berggren steps out smartly with Seek and Find, a declaration of what the author is looking for in life, and how far he’ll go to find it.  The nostalgic Where Did They Go?  comes next, recalling the old ways that once were so common.  The background music perfectly fits the tune, and the fiddle part is downright wistful.

Chickens and Crows is a fun barnyard song, with its teaching points tucked in.  No More Walls is a timely call for bridges between our differences.  It’s a “sing-a-long” type number, full of hope, but not likely to get Mr. Berggren invited to the White House anytime soon.   Climbing uses the images of heading up in the mountains as an analogy of conquering life’s challenges.

Let’s Do What We Can is an exhortation towards determined stewardship of the Earth, ending with the plea to “leave this world in better hands.”  The theme is kept up with the ensuing title track, This Planet We Called Home, reflecting on the passage of time, provides an admonition to remember the words of the prophets of the environmental movement; people like John Muir and Rachel Carson, and lately Bill McKibben.

Seeds is a haiku poem, backed by a soothing guitar line.

One of the gems on this CD is Berggren’s acapella treatment of an old Horatius Bonar hymn, set to music by the prolific Ira D. Stankey:  Only Remembered.  Berggren sings the melody and what sounds like several harmony parts. It’s a treat to the ears.

Mayor of Irishtown is a joyful tip of the cap to a lifelong friend and recalls a lifetime of adventure together.  Its’ dancing fiddle line enhances the song nicely.

Fire of ’21 is the first of two songs focused on the central Adirondack Hamlet of Indian Lake.  It’s quite a story, and I won’t spoil it by telling you the creative way the town saved part of itself from being consumed.  Raquettes is based on a poem by Wanda Burch, pays homage to the early explorers and settlers of the heart of the Adirondacks and their fight for survival in the harsh North Country winter.

Berggren takes time to salute the Whallonsburg Grange, and the rural farmers and woods people who built it.  Don’t Forget to Thank Harold is a tribute to the founding energy behind the Adirondack Museum, Harold Hochchild.  Now called the Adirondack Experience, the museum in Blue Mountain Lake preserves the history and ways of the Park in a remarkable living way.

Two Little Girls from Leonardsville tells the story of the early settlers of Berggren’s hometown of Minerva in the mid -1800s, and the story continues with Minerva, My Hometown, the result of a school project that involved local students asking their grandparents what had changed and what remains the same over their years in the village.

The recording peacefully fades out with an instrumental version of Mayor of Irishtown.   Pleasant music, lots of history, and some healthy philosophy all come together on This Planet We Call Home. Dan Berggren plays the guitar, banjo, harmonica, and octave mandolin, and is joined by Ed Lowman on bass, John Kirk on fiddle, mandolin, and pennywhistle, and Joel Rosenberger on accordion.  Kate Ritter and Jeremy Clifford contribute fiddle and mandolin on Whallonsburg Grange, and David Jones plays the uilleann pipes.

This Planet We Call Home can be obtained through the artist’s web site berggrenfolk.com or from Amazon.com   Digital downloads are available through all the usual places.