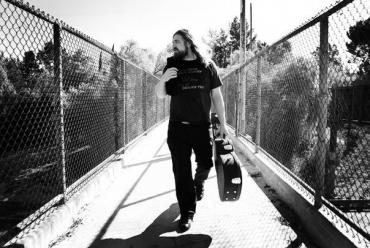 Darkest Darks Lightest Lights, the sixth full-length from songwriter Jake Smith (better known as The White Buffalo) was released earlier this month. Most of the compositions were penned in the studio, creating a sense of urgency. This energy and swagger comes through in this collection of 10 storied songs. The album is was recorded in his native Southern California at the same studio where he has laid down his last four discs. The record features the same powerful, poetic and character-driven narratives fans have come to expect from the songwriter, all delivered in his distinctive voice that begs you to listen to each word and each syllable to grasp the full meaning of each song.

Smith and I chatted the day before his album dropped. The songsmith was antsy and ready for an extensive tour of the United States, followed by Europe, in support of Darkest Darks Lightest Lights. He is proud of this new batch of songs and can’t wait to play them live. As the late Tom Petty sang, “The waiting is the hardest part.”

David McPherson: Talk about the recording of Darkest Darks, Lightest Lights. I understand it was a little different, as you didn’t have a lot of songs ready when you headed into the studio, so it was pretty spontaneous.

Smith: Yes, it was a little different. I didn’t have a wealth of songs going in. I wrote the bulk of them in the studio. I didn’t have any complete songs … only a handful of ideas. The bulk of them I wrote during the recording process. It certainly affected how the album came out. Not frantic desperation, but I did hit a lucky and prolific time. The urgency of that gave the album more of an up-tempo, more energy and excitement and swagger than anything I’d done in the past. For sure, it had to do with the process. I would write a song in the morning or an idea and then go record it in the afternoon.

McPherson: Why do you think you hadn’t written many songs before coming to the studio?

Smith: I don’t know if it was self-doubt or not. I had a bunch of ideas, but I wasn’t really confident with them. I ended up reworking many of them and some others just came out of the ether. For me, songs often come in silence. I’m lucky this time that I got in the right head space to allow the songs to come in and allow the ideas to flow. Once I had written a couple, I said, ‘Oh shit I got this!’ I really had nothing much going into the studio. I just said to my team let’s start Wednesday … fuck it, we will figure it out!

McPherson: Tell me a bit more about the recording?

Smith: We recorded it in Southern California in the same place I’ve done the last four albums. My longtime producers Bruce Witkin and Ryan Dorn had built out the studio. This one was a bit more daunting as they wanted to give the album more energy and rawness. We recorded the vocals and guitars first then layered the rest of the tracks on top of that. By not having any complete songs going in made it daunting, but I did a handful of songs like that with a live vocal and guitar track. You’ve got to be on that’s for sure.

McPherson: Tell me a bit about the title of the record. Does it speak to these turbulent times we are all living in?

Smith: Sure, it’s a bit about the times, but I try to stay out of politics. The idea is more about hitting on all of our human emotions. Dark songs take you to dark places and there are also happy feel good fun time places. I tried to hit the whole scope of human emotions and life with these songs.

McPherson: Tell me about the inspiration for the first single, “Avalon.”; I love the character in that one.

Smith: That one is about a man making some poor life decisions. He is stuck in his ways and searching for his switch … an answer and some way to change his life with immediacy, but it might not happen. It’s about this idea that he can swim to Avalon; go to this isle of fruits that is maybe a kind of fantasy.

McPherson: I especially love the story in “Border Town Bury Me in Baja.” Describe that one.

Smith: On that one I was juggling the idea of a drug dealer or underling getting caught up in slinging drugs for the cartel. The idea that he knows he is going to die, so it’s about salvation. The song is more of a country-punk number … it’s pretty aggressive and on the darker side of things.

McPherson: What about “The Observatory,” that’s another powerful character-driven narrative, isn’t it?

Smith: Yes, that one is about looking within and is a bit broader and more loftier in scope. It examines what it is to be human and this universal idea that we all go through similar emotions and similar timelines. We have choices as a race/people and in the end we are all kind of one. We all need love, have needs and wants, etc. This song makes that broad universal statement. I’ve always tried to write small human stories that have larger themes behind them. I’m always drawn to personal character-driven stories that are very human, but people can relate to them and think about larger ideas. That storytelling aspect of songwriting and narrative songs is not a thing of the past, but it’s fairly dead in popular music. I like going deeper … going to a place that is real and honest, which is not usually done in popular country music.

McPherson: Speaking of songwriting and narratives, who are some of your songwriting heroes?

Smith: I’m all about the greats … people that move me emotionally: Dylan, Townes, Tom Waits, Leonard Cohen, Elliott Smith. I appreciate songwriting on many levels. I like when people can have a palette that is larger than one style or one topic. You can write about anything. I’m lucky that I am free to write about anything. I can write about a mass murderer in one song and then write a love song about heartbreak in another, which is more personal.

McPherson: Do you think your music could fall into that sub genre called outlaw country, where the music from the likes of Willie Nelson, Waylon Jennings, Billie Joe Shaver, and Steve Earle reside?

Smith: I don’t know. What does that even mean? To me it seems like a fabricated genre. I’m definitely an alternative to mainstream country music, but there is still definitely some country to what I do. Am I an outlaw? No. At the same time, are any of those guys outlaws?

9. The Heart and Soul Of The Night