The Death of Rock and Roll Has Been Greatly Exaggerated

NYC based music producer and songwriter, David Pattillo aka Strange Majik’s latest album, at its root draws from the bare bone devilish descent into the blues of 2012’s punk blues duo The Dead Exes, and last year’s excursion to the hedonistic urban funkadelic and thriving sounds and undercurrents of the city’s underbelly and shadows on his collaborative “Lights On” under the pseudonym Strange Majik. Without the boundary exploitation and explosion of those creative whirlwinds, his latest album would be yet another collection of songs labeled as rock and roll for a undiscerning consumer to devour like a sugar coated treat, melted and forgotten.
Fortunately out of that caldron of exploration “Raised on Rock ‘N” Roll” is a redefining rock record, bold with flourishes of experimentation. A fusion of past, present, and future on this collective musical carousel ride we’re taking together. It speaks to us each as individuals, yet binds our varied inner beats to a more common experience.

Raised on Rock and Roll will encompass many things to many people, mostly though it’s the free spirit, and attitude of resistance against the status quo. A weekend in the woods in the right conditions can have the effect of being raised by wolves with howling as a means of primal communication, a trip to a carnival as a kid can have a lasting effect of heightened individuality and rebellion. Mostly though it’s a love sonnet to the music and the special musicians that when talked about sound to others like insider information, a secret society that only those with a special cosmic insight know their names and music. Those raised on rock and roll are the insightful who whisper names that in time end up on everyone’s lips. You can recognize them, they’re devouring the liner notes, they know the studio musicians and every session they’ve played. Hushed conversations while the vinyl spins, names are dropped, Doug Sahm, Graham Parsons, Flo and Eddie, Leon Russell, Steve Cropper, The Swampers. Literary influences intertwine with the sounds, Kerouac, Burroughs, Kesey and Wolf. Those raised on rock and roll bring to us what exists on the edges of society and dissect it, shape it and keep it is perpetual forward motion.

t is this mythological, legendary, storied and surreal past that Strange Majik unleashes his creativity and innovation to pay unbridled loving homage to on “Raised on Rock ‘N’ Roll”
With the power of his experience, blues chops, funky twists, soulful snarls, and bone bustin’ riffs that could come straight outta Muscle Shoals or Stax this album will put to rest that question, is Rock and Roll dead? The answer is a resounding HELL NO!
Celebrating a year-long residency at the retro chic Tribeca haunt Belle Reve where on any given Tuesday you’ll never know who’ll show up to jam.

“I’m so happy to have my weekly Tribeca residency at Belle Reve. It’s enabled me to play my music for new folks every week, get some immediate feedback, and inspire a lot of people to believe in rock ‘n’ roll again. I see all ages come out and it’s heartening to see how much fun everyone is having. There are so many bands in town, but not many that do what we do. I’m just glad people trust in the boys and me to deliver the goods. There’s so much emotion wrapped up in the lyrics and they will cut pretty deep, but there is such a release that happens live for the audience and for me. I feel like Leon Russell on his live record when he says ‘Now if you all don’t feel like you’ve had a religious experience tonight when you leave, you just go get your money back. I don’t need it!’ That may not be the hippest thing to say in indie rock today or the smartest, but with my crowd it just feels right.”

“Going to Miami” opens the record with a fat back chitlin’ groove and a gritty guitar riff straight outta Jimmy James and The Blue Flames. One drop of the needle and its BANG! “Listening To Leon” sounds like it could have been a lost Derek And The Dominoes gem. Self deprecating, age wary, slides soaring and riff heavy it’s an infectious rocker worthy of Leon’s praise.

“Don’t Mess With The Girl From Texas” and “Raised on Rock ‘N’ Roll” are two southern tinged anthems full of feathers and flair. Background vocalists Mollie King from Tennessee and Briana Layon from Tulsa bring the swampy southern authenticity here. These two are like an ice cream sandwich with Claudia Lennear hiding in the middle.  Classic indeed! Anthony “Flynn” Mullin of the NYC band The Blackfires cameos on rippin’ guitar runs as well. The result is a classic rock standard and an undeniable Texas honky tonk rager.

But then the masterful “Electrified” slows us down to a sexier groove that recalls a vibey JJ Cale moment.  A haunting atmosphere eases you into to a plush 16 bar blues with a message. “I had just seen the movie ‘Amy.’ recalls Pattillo and the song just wrote itself. I related to her brutally addictive relationship with her boyfriend that fueled her iconic storylines, which on one hand gave her beautiful songs but eventually destroyed her life.”

“Workingman 99” is a more raw and immediate revisit from the “Lights On” record with Geoff Burke holding down a “Brass Monkey” Beastie’s vibe. No doubt this is one of the most visceral tracks on the record with the entire band working overtime. And its lyrical lefty sensibilities are right on time for this revolutionary election year! “Nolita Strut,” which could be an Allan Toussaint instrumental, along with “If You Got The Time I Got The Love” and “Girl From Texas” originally appeared on The Dead Exs records punkier and loose. But here they have evolved into tighter, punchier, maximum party pleasers.  “Cocaine Kisses” keeps the fun going and the humor high with Floridian Greg Holt’s fiddlers nod to Americana coaxing Pattillo’s wit.
“Gone” starts with the dead thump of Pattillo’s foot on the bootbox. GSauce’s upright bass moans like a crawling king snake in the mud. Spada’s piano delivery is dreamy and masterful.  Pattillo’s vocal rattles your bones. It’s a long slow ride that delivers. But perhaps the most epic tune on the record is “Pull The Trigger.” From its solitary beginning with Pattillo and his slide guitar on a single mic, this one genuinely reflects our violent often divisive times with a beautiful cameo from the NYC band Walking Shapes frontman, Nathaniel Hoho.

Pattillo shines as an ace songwriter on this record, and not only did he pen all the songs, but engineered, produced and mixed the record too as he did on his last record the phenomenal“Lights On”

“I thought this one was going to be fairly easy but it became a huge labor of love and it kept growing. We started tracking the record with just the three of us in the room but then the upbeat songs were missing something. It was a challenge to get the right players and vibe so the band kept growing.”

This is an album you’ll not easily tire of listening to, there are so many layers on here each new spin is a discovery of something new and besides that it will just get you jimmy jumping wildly. I’ve been trying to figure out my favorite song, but the whole dang thing blows me away, definitely an LP to be listened to fully. Released on April 18th everywhere music is procured. 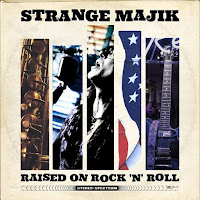