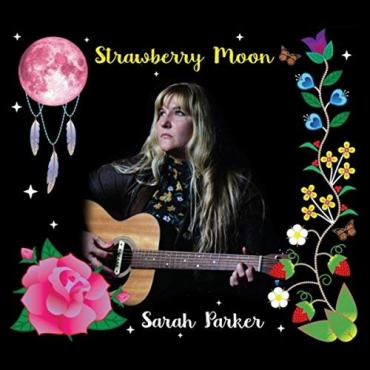 Working alongside her husband and popular blues musician Robert “Freight Train” Parker has resulted in one of the most memorable debuts in recent Americana music history. Sarah Parker’s Strawberry Moon is a fourteen song blast of musical creativity with varying tempos, feels, intelligent instrumentation, and a spotless vocal performance establishing Parker’s singing talents among the forefront of those working in the genre today. “Sugar Town” begins Strawberry Moon on a seemingly autobiographical note and there’s a great of sentiment coming from Parker’s vocal without ever laying it on too thick for listeners. It’s a great part of the album as a whole how Parker is capable of depicting dramatic stories through the craft of song that rely on familiar themes for the genre, but never risks melodrama. She sings with a clear, urgent note, but likewise takes great care to get under the skin of each tune.

“You Can’t Tell A Heart” is emblematic of her intelligent songwriting; she takes subject matter we’ve heard before and presents it with her own personal take and use of the language. One of the strongest points in her songwriting is the profusion of choruses that never press too hard on listeners but, nonetheless, serve as the natural climax for each of the album’s songs. The gentle lyricism of the song’s electric guitar plays off against moonlit organ fills accentuating the song’s heartbroken mood. The organ has a much stronger presence in the song “Even When You’re Lonely” and percolates from the first thanks to its driving tempo and the stinging lead guitar playing throughout the song’s entirety. It’s another of the album’s songs with a decidedly commercial air, but Parker never panders for listeners with this material. Strawberry Moon is uniformly genuine and sparkles with palpable emotion.

The album’s title song “Strawberry Moon” definitely has a presentation to suggest Parker envisioned it as one of the biggest numbers and she doesn’t disappoint. A number of instruments beyond the basic make their presence felt throughout this release, but mandolin provide some of the album’s most memorable musical moments. The dream-like sway she achieves with the song is delicately maintained throughout and never strains the listener’s patience. The sense of place in her songwriting is strong and “Rose Hill” brings that to the forefront with a bluesy slow burn. “Talk in This Town” is another of the best songs included with this release., an incredible country track in the mold of classics from yore, but it has a thoroughly modern edge as well in the way Parker and the production frames the cut.

“Gypsy Rose” is another of the most thoughtful songwriting turns on the album and Parker’s voice comes through here with clean, clear emotion in tune with the song’s slow instrumental glide. It reaches its peak with a gently striding chorus Parker sings along with great skill. The brief guitar break during the song’s second half sets up a final victory lap that ends the song is a very satisfying way. “Longley Highway” is the album’s penultimate cut, but it’s the true finale for the release and serves up a recap of the album’s themes set apart by its tangible cinematic allure. Sarah Parker couldn’t have gotten her musical journey off to a better start – this is a formidable effort in every respect and should garner her instant acclaim.