There are two versions of this extended play CD — a regular EP and an acoustic version of 5 songs (ten total) from this groove intense dance driven Hollywood, California band that straddles soul with the energy of a pop band. The production value is excellent – multiple sounds converge over thickly charged vocals – mixed soulful like the 70’s Angelo Bond (lp Bondage), with some deeper reaches of Marc Anthony Thompson (“Lullaby Drive”). Quite enjoyable.

These Vintage Trouble EPs start with “Do Me Right,” and the regular version is hot and primed for a dance floor. The acoustic version has a little Oriental flavor in the strings but it’s well-produced and probably the one I’d defer to. It provides some nice percussive elements and seems better suited to a warm presentation than a hot one. But, they are essentially both good. 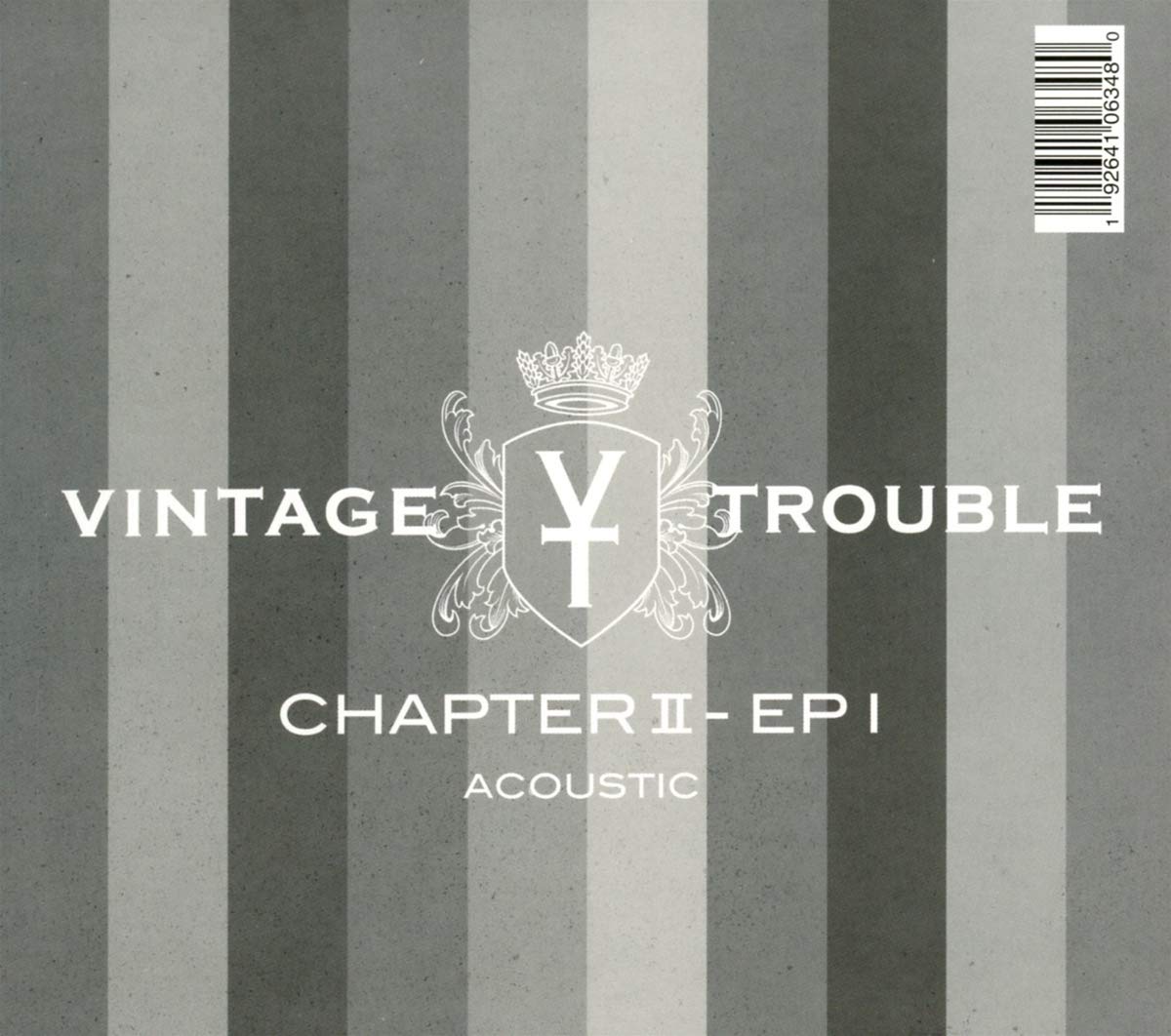 “Can’t Stop Rollin’” is not to my liking on the regular version. It does have energetic dance possibilities and that’s its only appeal. There are moments where it sounded a little contrived. Its salvation, however, is that the band has proficiency. But the material they are working with is still a little lacking in inspiration. It has moments – it has some ingenuity – but, it lacks somewhat in its presentation. However, this band is not out — they’re still standing. For one thing…

Ty Taylor’s voice is excellent. He maintains his high quality for this type of showcase and virtually every performance. He has a tone that is attention-grabbing and attractive. The song features an unexpected organ break and clean hi-hat beat along with fine backup singing. The song itself is in the mold of another LA band the 80’s soul-rock unit The Bus Boys – that was another high energy interracial dance band that was always exciting in delivery and live performance. They’re a little more rock-oriented than Vintage Trouble but Their Minimum Wage Rock and Roll album had tons of memorable songs (“Johnny Soul’d Out”) and finger-snapping tunes just like VT offers. The Bus Boys have been at it since 1978 — and they’re still at it in 2019.

On the acoustic EP “Can’t Stop Rollin’” has more sound hues, the acoustic guitar touch is bright and the Ennio Morricone spaghetti western whistling plays a nice role in this song — far more appealing in its acoustic presentation. The backup singers radiate, and their handclapping makes it exhilarating.

Falling back into an area more to my liking is the slower song “My Whole World Stopped with You,” a strikingly sung song with warmth and power. It’s not The Temptations, the Miracles or the Four Tops – these fellows Vintage Trouble — have their own groove to lay down and they do so with gusto. This has some vibrant sounds that keep it moving along at a nice clip. Never boring. The acoustic version is equally good – maybe a little more intimate to some ears. Acoustic guitar in a soul-oriented band is also a welcome change. I take the acoustic one over the regular version. However, a little suggestion since the regular versions seems as well-suited even acoustically. Make it work for you as a production: next time try to take one of the best songs and blend and/or segue the regular version into an acoustic finale or vice versa. Start out calm and work it up to a grand finale. Would make for a tantalizing arrangement. Hey, we’re talking show business here, right?

“Crystal Clarity,” continues with a distinctive vocal and crisp drum beats. More of a handclapping song than dance floor gem. I like the vocal effects that are laid down. Even though they’re young men it’s obvious they may have listened to some doo-wop some time in their lives and blended that genre with some hip-hop/ r&b. I think they made it work effectively. They’ve developed a hybrid of melodic upbeat mouth percussion and it’s all choreographed like a dance troupe. Then — when least expected, a horn section blares in with trombones and the funk goes nuclear.

This is not Sly and the Family Stone or Earth, Wind & Fire but then it’s not that decade either. These guys do know how to control their showcase. This group effort does have a taste of what the 70’s horn band Ballin’ Jack with the late Luther Rabb served – a hot spicy groove and this was years before Earth, Wind, and Fire. Rabb’s vocals on “Hold On” was as fiery as the lead guitar and trombones were electric.

The acoustic version loses none of its energy and is satisfying. It has violin picking with these Oriental notes and the unified vocals of Vintage Trouble: always powerful. I may even like this better than the original take. This is a good track even in its unorthodox manner. The percussion has a nice bottom. The vocals are unified and the violin strains solidify.

With string ensemble, the vocalist sings more in a Motown fashion on “The Battle’s End,” and while he doesn’t have a commanding voice like Gene McDaniels, Brook Benton or Levi Stubbs (The Four Tops) — he does have a melodic voice. The musicians involved pour down miscellaneous sounds that just pile on — not too heavily — and their confection adds just enough sweetness where it’s needed and keeps everything interesting from beginning to end.

This song has a good melody and drives through. It suffers at times from 70’s electronic instruments overproduction and over processing. But for the most part, the boys keep it in check like professionals are expected. Nothing is bombastic because the soul comes through over all the gloss. I like the under the surface pound of the rock piano on this song. That could have been mixed a little hotter.

The acoustic version is reggae flavored and with the addition of the clearer acoustic guitar and organ, the song has a more welcome decorative hook. The horns are subtle, but the good time feeling is conveyed effectively. This band could go three ways if they focused a little more and should – dancehall soul band, R&B funksters, or reggae purveyors. Their sound and arrangements work on all three. Audiences have a short attention span with too many various music genres. I’m not a big fan whatsoever of injecting rap or hip-hop into a song that is already traveling at a nice clip. My rock ears are just trained to keep cruising and the female rap singers slow the entire feeling down to crawl. It also sounded as if it was added to generate another audience interest. If you’re going to keep something upbeat rap is not always the best way to go. Soul, rock, country – can all be upbeat, driving and invigorating. Unfortunately, the inclusion of rap in the middle of energetic music suddenly — will often be like taking your foot off the accelerator of a fast car. 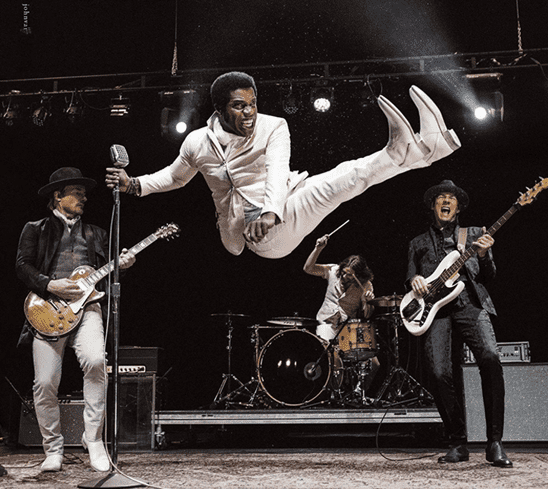 This song had momentum until the female rappers added too much salt to the recipe and their lyric message may not resound with everyone in the listening audience. Why jeopardize that with politics? Want some advice as entertainers? Remain neutral. Conservatives buy CDs and tickets to concerts also and their money is just as green. Their rap performance was fine – it just didn’t fit on the menu. It certainly didn’t add any cred to the performance nor was it in keeping with the high level of funk and soul generated by who? Vintage Trouble.

A band like Vintage Trouble must decide whether they are a soul-funk-groove band with some effective doo-wop verbiage overtones or a rap group. You don’t want to lose an audience because of mixed messages. Vintage Trouble has excellent vocals. That’s the big selling point. Good energetic backup, sound, and arrangements. But there are kinks in the armor to be smoothed out — or elevation from opening act to starring act may elude VT. They must also explore the producer’s chair a little more carefully. Some of what is being done is well done — but it is unnecessary. Sometimes it just felt like they were throwing in the kitchen sink. Back off a little. Focus on a genre, a style and stick with it. Today, it’s not enough to just be good musicians and performers. The Four Tops were a great soul group with a powerful, beloved lead vocalist with excellent studio musicians in the 60’s. They had consistent hits for years — but the real genius behind it all were three unseen Motown songwriters’ — Holland-Dozier-Holland. Many forget that. When the Tops moved to Dunhill Records and away from Holland-Dozier-Holland — the hits dried up despite the great singing and their legendary soul status.

I didn’t have a hard copy of the CD, so I can’t comment on the CD package. Vintage Trouble is a four-piece that has other albums and Eps available. The band includes Ty Taylor on vocals, Nalle Colt — guitar, Rick Barrio Dill – bass, Brian London, keyboards, and Richard Danielson – drums. No credits for producer were found.