Call it what you will. The distinction between bluegrass and nugrass is mostly attitude. For the Hackensaw Boys, it’s not so much a matter of reverence as it is the ability to make their own imprint on traditional trappings. Consequently, many of these songs tap the same rustic roots as their revered predecessors, be it a mournful Appalachian ballad like “Content Not Seeking Thrills (Ain’t You)” or more down-home tunes like “By and By” and “Limousin Lady.”

Despite their adherence to an easy pluck, steady strum, and ready stride, the Hackensaw Boys’ earnest intents can be deceiving. A back porch performance reveals a few loose floorboards. For example, “Ol Nick” relays a cautionary tale about a character as deceitful as the devil, while “Wolves Howling” provides a chilling lesson on bad omens that are often difficult to avoid.

Still, despite the occasional betrayal of a darker side, producer Larry Campbell ensures that the proceedings shuffle along at a spirited clip, brimming with amiable attitude and a dedicated delivery. Thus, sentiment is instilled in abundance, with songs such as “Don’t Bet Against Me,” “You Want Me to Change” and “Worlds Upside Down,” which reflect our universal desire for affirmation and acceptance.

These and other lines are sung with rough-hewn melodies and an added measure of crystal-clear confidence. Make no mistake, the Hackensaws are old school specialists, but they possess a modern musical mentality. 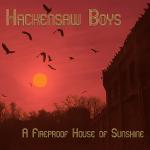 “If The Salt Don’t Kill Me, It’ll Be The Sweet”, Hackensaw Boys Are Back With A Vengeance