I am tenacious when it comes to music. When I find the good stuff, I beg and cajole and hammer my friends to listen and sometimes they do— the ones who know I wouldn’t hammer if I didn’t really think it was something really worth listening to. I cannot remember a time I was not promoting music I considered above the norm. When I wrote this review for No Depression back in June of 2014, I knew that Lost Leaders’ music was at least that. I wrote that the album would be amongst my Top Ten and maybe even Top Five albums of the year. What I did not know was that it would be my pick for Album of the Year, running away from albums I considered of somewhat equal stature— excellent albums all, but that one was something else!

I am also using this opportunity to replace old videos which the band pulled from Youtube with newer ones as good or better. If you prefer music to words, the new videos give you all you need to know and hear to make you too a Lost Leaders fan. Now, though, let us take a trip back to a time I was being steamrolled by an album so many people say they want but refuse to hear. It is self-titled for a reason.  Ready?  Go!

The Lost Leaders album is self-titled, sports fans, but it does have a track on it titled “Too Good To Be True,” and there are moments when I truly believe that it is just that. I listen to music all the time and when an album like this comes along, I want to shout it to the world — I want to run into the street and plug my earbuds into the nearest ears I can find and force them to listen. I want to get stuck in traffic, roll down the windows and crank it up. I want to throw listening parties and pay taverns I frequent to play it. I even want to learn guitar, because when the music overwhelms, that is always what I want to do and this is overwhelming. I love this album. I love it.

I write a column for Bob Segarini’s blog, Don’t Believe a Word I Say, and I wrote about it there. I thought about writing a review on my own pages and almost did but so few plug in that I hesitated and decided it would reach far too few. So here I am, writing it for No Depression and hoping for people to find it and pass it along because what I have to say is worth sharing.

If this album had only one song — an hour-long version of “Anything You Want To Be” — it would be worth it. I loop that song when I have to clean house or wash dishes and am constantly amazed by how it takes me back to the late-’60s and early-’70s, reflecting the sounds of Crazy Horse and Illinois Speed Press. The rest of the album is outstanding, but that one track— oh, man!

That column I mentioned before? Here is what I wrote:

I took a long walk this afternoon, longer than usual. I had loaded the files sent to me by Peter Cole of Lost Leaders onto the MP3 player. Lost Leaders is a band comprised of himself and Byron Isaacs (Ollabelle, Levon Helm, et. al.). I wanted to get a good listen outside of the cave, so I headed off, the MP3 player booming the first track, “Horizontal Man,” into my ears. I walked and walked some more. It rained, hard for a bit but still I walked. I walked the length of two albums and came back convinced that this will easily make my Top Ten for the year and possibly the Top Five. And there are reasons.

For one thing, it is a production gem. Front to back, the sound is as clean as it could possibly be, even during band jams and bridges. Guitars are crisp and clean and the fuzzed-out guitar solos (courtesy of Cole), as integral as they are to certain songs, are separated enough to allow the guitar sounds free range. The keyboards, played by guests Brian Mitchell and Jared Samuel, add real atmosphere to the songs. When the horns kick in, sadly too seldom, it is a flashback to some of my favorite horn-laden bands, starting with If (Clark Gayton, Jay Collins, Kenny Rampton: you hit all the right notes). Justin Guip masterfully recorded the tracks, including the overdubs (which were laid down at the very coolly-named the Guiping Post, but maybe I think so because that first Allman Brothers album kicked my ass halfway across the room back in the day). A nod has to go to Bryce Goggin, who mixed, and Dave McNair, who mastered.

Musically, Lost Leaders are all over the map. “Keeping Busy Feeling Fine” rides the line between upbeat country and country boogie without sounding country at all. “Horizontal Man” is rock straight out of the ’70s and is freakin’ killer when the horns kick in (sounding a bit like Ides of March or Lighthouse, which thrills me to death) and the rhythm alone is its own ride. “The Line The Lie” is an acoustic/electric/vocal harmony fest of sounds and very ethereal in structure. “Miracle Mile” is full of twists and turns which absolutely thrill the producer and musician in me. But the real capper is the last track, “Anything You Want To Be”— a throwback to the bands of the late 1960s and very early ’70s. The guitars are reminiscent of those of Illinois Speed Press in the use of controlled feedback, the free-flowing riffs a contained firefight amongst musicians reminding me of Neil Young & Crazy Horse in terms of instrument tone. I miss the days when musicians would end songs with jams like that.

Yup, I love this album. It will be among my top picks for this year, for sure and I’m already jonesing for the next one. If you haven’t watched the videos, do. These guys are right up there with the best. That’s Lost Leaders, sports fans — a band to watch closely and turn your friends on to. That music they don’t make anymore is right there. 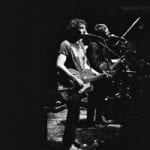