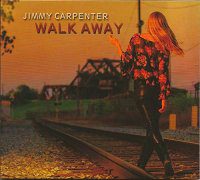 When Jimmy Carpenter was first starting out, the number of girls who flocked around him when he played prompted a jealous local promoter to bemoan the fact that Carpenter had too many girlfriends. Thirty years later, it appears that’s still the case. Carpenter says that his sophomore effort, Walk Away, was inspired by past, present, and future women in his life, enough to fill thirteen cuts with odes to and bitches about his paramours. But Carpenter is a gentle soul, so the reviews and regrets are more wistful than wicked.

He honed his sax skills playing with Tinsley Ellis for a year before joining former Nighthawk Jimmy Thackery and the Drivers from 99-’04, then moving to New Orleans and hooking up with Walter Wolfman Washington’s band the Roadmasters. He was able to utilize his sills as an arranger, as well, in the Crescent City and keeps busy as a sideman playing with musicians including Mike Zito and the Wheel, Eric Lindell, Anson Funderburgh, Honey Island Swamp Band and Papa Grows Funk. Along the way, Carpenter has developed into a fine vocalist as well.

Carpenter shows off his Muscle Shoals influences on “Walk Away,” snaky, funky soul with King Curtis-inspired riffs. Former Dr John and the Lower 911 guitarist John Fohl provides Cornell Dupree licks as Carpenter howls soulfully, “sometimes I wish you’d leave me so I could watch you walk away.”

Carpenter’s duet with Reba Russell on the closer, “Fellow Traveler” is stunning. The vocal harmony is ethereal, ringing with the grace of a Carter family offering. It’s what country ought to be, one foot in the past and one in the present, crossing over effortlessly from gospel to country to soul.

Sandwiched in between are testimonials to a bevy of beautiful babes who have stepped on his heart, leaving footprints of varying depth. “She’s Not You” has a Hall and Oates feel with it’s bluesy, melancholy soul. “More Than Meets the Eye” addresses a chance almost blown because a pretty facade covered up an interior treasure with more lasting power and depth.

Walk Away is a great second effort, beautifully produced and backed by an outstanding array of New Orleans musicians. Carpenter titled his first release Toiling in Obscurity. But with the work he’s put in and the skills he exhibits here, that description no longer applies. Jimmy Carpenter is finally out front, in the spotlight where he belongs. 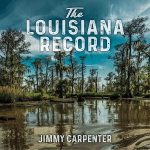 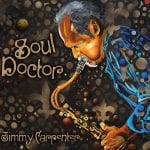