Back in Mott The Hoople’s day, you never would’ve picked frontman Ian Hunter as a candidate to age gracefully. Improbably, he has done just that, perhaps because he was always a bit older than his peers. Hunter’s actual year of birth has long been a matter of dispute, with most accounts putting it somewhere between 1939 and 1946. So this quintessential ’70s rocker might be pushing 70 himself, and Shrunken Heads resoundingly proves that age ain’t nothin’ but a number.

By now, Hunter has had enough near-misses and bad luck for ten people. From Great White to Barry Manilow, his songs have been bigger hits for other artists than for him — even “The Drew Carey Show” used the Presidents Of The United States Of America’s cover of “Cleveland Rocks” as its theme song instead of Hunter’s 1979 original. Just look up Hunter’s 1983 video for “All Of The Good Ones Are Taken” and ponder why on earth that wasn’t an enormous hit.

To Hunter’s credit, he betrays no bitterness about his cult status. Instead, he has settled into the role of a pub-rock raconteur along the lines of Ian McLagan, quick with a self-effacing story or joke. It’s a role that suits him well.

Fittingly, the album opens with an apology, “Words (Big Mouth)”, which is something one suspects Hunter has to do a lot of. Witty and self-deprecating, “Words” is one of his laugh-at-me specials, concluding with Hunter chanting, “Yakkety yakkety yakkety” while the background singers (Tweedy among them) scold, “He’s got a big mouth!”

Always rough, Hunter’s raspy bellow has ripened into a character-actor croon that allows plenty of personality to come through even when the music veers toward generic. “Fuss About Nothing” starts with exactly the same midtempo chukka-chukka rave-up you’ve heard from a zillion different roots-rock types. But Hunter’s smart-aleck lyrics (which begin with him offering up a large bridge and the Pyramids of Egypt for sale) and wise-guy charm raise it far above the crowd.

The arrangements and attention to detail stay on-point throughout. “Brainwashed”, for example, has an interlude where Hunter counts off the numbers 1-2-3 in different orders. In what is either the weirdest coincidence ever or a fantastic in-joke, Hunter counts off “2-1-3” exactly 2 minutes and 13 seconds into the track. “How’s Your House”, based on a familiar post-Katrina query in New Orleans, choogles along with a blues-soul house-party groove. And since Springsteen doesn’t write songs like “Soul Of America” anymore, it’s nice of Hunter to step into the void.

Hunter mostly stays on the right side of the line between wry and burlesque, but not always. “I Am What I Hated When I Was Young” sounds as slight and tossed-off as the title suggests, with a hootenanny jug-band arrangement underscoring just what a thin joke it is. Still, that’s the penultimate song, and it functions as a nice breath-catcher before the finale.

The closing track, “Read ‘Em And Weep”, is a plaintive voice-and-piano ballad, and it’s simply heartbreaking. Written in the aftermath of a shattering breakup, the song moves from reading the writing on the wall to reading old love letters — “paper trails,” Hunter calls them. He waits until the conclusion of the album to let you in on how much pain lurks behind his laughter.

A crafty soul right to the end. 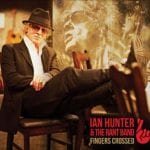 Songs For All The Old Dudes