Eric Andersen Mingles in the Universe of Lord Byron

Artist: Eric Andersen
Album: Mingle with the Universe: The Worlds of Lord Byron 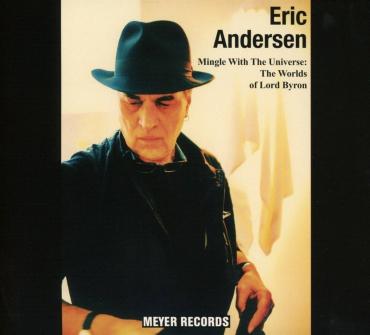 “Had the punk scene existed in 1812 Lord Byron would have easily claimed the mantle as the First Bad Boy of Rock for having created the original blueprint of a sex, drugs and rock ‘n’ roll life template that would pave the way for rebels to come like Arthur Rimbaud, William Burroughs, James Dean and Jim Morrison.”    Eric Andersen

What do singer-songwriter Eric Andersen and poet Lord Byron have in common? As fate would have it, there is a strong creative connection between the two. It’s a bond that transcends the ages. Case-in-point; Andersen’s latest release, Mingle with the Universe: The Worlds of Lord Byron, an album which gives melody and stringed instrumentation to the great 19th century Romantic poet.  For generations Lord Byron has been confined to college literature classes and the inner-circle of the literary elite. Not anymore. Andersen’s album succeeds with a sense of finesse and ease that is remarkable. It’s as though it was meant to be; a collaboration waiting restlessly to be channeled. There is a sense of an artistic and spiritual holy bond between Lord Byron and Eric Andersen that called this album into existence.

Here is a survey of both poets; Andersen, one of the finest singer-songwriters of our times and Byron, the rebel ‘curled darling’ of England’s Regent Age.

Eric Andersen is not so much a songwriter as he is a song-poet. The term is the apt title for a soon-to-be released documentary on Andersen. It is an accurate way to describe an artist whose career spans six decades. His began in the early 1960s in Greenwich Village with a band of songwriters that included Bob Dylan, Tom Paxton and Dave Van Ronk.  He also traveled by train with The Band, The Grateful Dead, and Janis Joplin on the ill-fated Festival Express tour of 1970.  In 1975, he was there for the launch of Dylan’s Rolling Thunder Revue. Indeed, Andersen has set trends based on his own creative vision, which includes a remarkable sense of how poetry and melody blend together on songs like “Thirsty Boots” and “Violets of Dawn.”

In 1972, he was ahead of the pack during the singer-songwriter movement with the release of the classic album, Blue River. While James Taylor and Carole King were embarking on their solo careers, Andersen had been there for nearly a decade. The singer-songwriter movement had caught up with Eric Andersen. Following frustrations with his label-at one point they lost the master tapes to the album that would follow-up the successful Blue River, Andersen formed a trio with The Band’s Rick Danko and Jonas Fjeld.  Since then he has released a series of albums in tribute to the American Songbook and The Beat poets of the 1950s including William Burroughs and Jack Kerouac. His pioneer-elder statesman status in today’s Americana-roots movement is solid, if not exactly on the publicity radar.

Mingle with the Universe: The Worlds of Lord Byron throws open the gates to new creative avenues for today’s songwriters. There is a deep-well of history’s creativity waiting to be discovered and given new life.

The album began with a chance visit to Byron’s ancestral home, Newstead Abbey, in Nottingham, England. What he discovered there must have felt like fate. For Andersen, the life and times of Lord Byron came into deep focus through a crystal-clear-epiphany. It started with a leak in the ceiling of the main hall of the Abbey.  It had been there for 214 years due to Byron’s habit of using the great hall’s walls for target practice with his pistol. Andersen offered to perform a benefit concert to repair the damage to the Abbey. This opened a musical door to the life and worlds of Lord Byron two centuries after he took his last breath. But, the task that lay ahead for the song-poet was to create new work to perform at such a benefit.

With the completion of Mingle with the Universe: The Worlds of Lord Byron, Eric Andersen has confirmed the innovation he began with his previous album, The Shadow and Light of Albert Camus. That is, the merging of artistic disciplines through boundless acts of fearless collaborations-time and mortality be damned. Andersen has discovered what may become a new genre for the singer-songwriter; unbound collaborations with historical figures in danger of extinction through neglect.  Andersen’s album, like Lord Bryon, is a quest for universality and truth through direct experience.

This work hinges on Andersen’s ability to match mood and melody with the flow of words that are carefully transposed into song lyrics. It is a risky endeavor, shaking songwriting out of its modern, often introspective, comfort zone. But, aren’t the best works of art born on taking dangerous grounds?

With craftsman-like skill, Andersen merges melodies, instrumentation, and performances into something new.  It is done with admiration and respect for the great poet losing none of the raw power of Byron’s original verse. There is not a moment of wasted music here. All comes together in an intricate lyrical dance. Most important, Lord Byron comes to a new and relevant life. Eric Andersen breaks him out of the prison of the literary elites, history, and university literature classes.

In 2015, the album was performed in the Green Hall of the Newstead Abbey beneath the leaky roof. Accompanying him was the violin of Michele Gazich and the oud of Giorgio Curcetti.  The album was recorded soon after in Cologne, Germany at Meyer Records, Andersen’s European label.  Like the Abbey performance, it was recorded live in the studio with the trio. Overdubs were completed later for enhancement, which included Inge Andersen on background vocals, Cheryl Prashker on drums, percussion, and the West African djemb, and Paul Zoontjens on piano.

About writing shotgun with the great poet, Andersen notes, “Any schoolboy would agree that Byron was a born songwriter.”  Andersen took minimal liberties with the verse, making minor changes for the sake of the musical rhythm patterns and song arrangements.

The songs flow in a loosely chronological and thematic order. Opening with “There’ll Be None of Beauty’s Daughters,” a song of romantic longing against the backdrop of the ocean in the evening. “She Walks in Beauty” is an eloquently performed song of adoration. Then an interlude away from the romantic leads to the stark and brooding, “Darkness,” a song of emptiness and despair. The collaboration between Byron and Andersen’s spoken- word performance create an apocalyptic vision that is ‘a dream, but not all a dream,’ as Byron wrote.  “Darkness” portrays Byron as the first literary surrealist foreshadowing the coming trends in poetry.  Andersen performs the verse like the resurrection of an American Beat poet. Had Lord Byron been a blues songwriter, “Song to Augusta” would have been the result. A darkride into the abyss of despair even as the poet is drawn to a ‘solitary star,’  The recording gives a fine example of the blend of the music with the ancient stringed oud.

The title song, “Mingle with the Universe” is a cosmic, pagan, gospel anthem to the ocean and the peak of this collection. Andersen sings Byron’s words, “There’s pleasure in the pathless wood/There is rapture in the lonely shore.” It is a celebration of the sea and a passionate love song to the universe. Call it Byron’s baptism into the blissful arms of nature.  “Mingle with the Universe,” stands alongside the best of Eric Andersen’s work. He captures the spirit of a rebellious, restless soul whose passionate life grew out of the suppressed and rigid mores of the pre-Victorian age. It’s clear from the song that Lord Byron found his soul in the universe of romance and nature. It is also clear that Eric Andersen has taken great joy in giving musical flight to these words obscured by antiquity.

As his peer and friend, Bob Dylan, wins the Nobel Prize for Literature and spends his time in the studio exploring the American Songbook, Eric Andersen has been opening the dusty windows and unread book shelves of philosophers and poets of history. He calls them back to life through a passionate and relevant haunt that reaches out to us. It is not a horror kind of haunting, but a gentle and seductive one.

If Lord Byron could speak to us today, he may not ask to be remembered in the way he was during his life time. But his words, written so long ago, call us to live our lives fully-even as his collaborator, Eric Andersen, calls us to seize the day and mingle with the universe.

Awake (not for Greece-She is awake!)

They never fail who die in a great cause.” 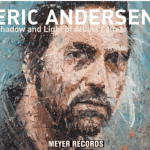