Artist: The Lowest Pair
Album: Uncertain As It Is Uneven

Kendl Winter and Palmer T. Lee, the Lowest Pair, doubled down – heh – on their twinning tendencies this spring: their two voices and two banjos appear on two new full-length albums, released at the same time (and recorded in the Twin Cities, yet.)

The projects are fraternal rather than identical siblings; Uncertain As It Is Uneven will be more familiar to fans of the bare-bones production that marked the duo’s two previous outings, The Sacred Heart Sessions and 36¢.

The Lowest Pair took their name from a song by the Grammy-winning country musician and songwriter John Hartford, a onetime riverboat pilot who penned the Glen Campbell hit “Gentle On My Mind.” For the title of their third album of original material, they mined its lyrics – a weird, whimsical homonymic pun on the Lord’s Prayer – a second time. The album’s heartworn, gentle ballads of love and pain twine their voices in a sort of conversational harmony, each one taking turns leading, receding or underscoring the other in a constant, fluid dance, that works, maybe, even better for the pair’s intuitive facility for the sound as well as the meaning of language (which is, after all, the key to their favorite Hartford tune.) Ringing, twanging banjo and guitar ground the album in the rich dirt of American roots, bluegrass and rural country, and give it the timeless feel of the Lowest Pair’s previous releases; it’s the voices and the words themselves, enmeshed and weaving, that make the songs on Uncertain As It Is Uneven cling like ghosts. 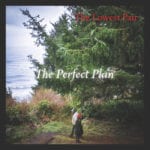