David Grier – I’ve Got The House To Myself

Artist: David Grier
Album: I've Got The House To Myself

David Grier has a fine bluegrass pedigree; during the 1960s and ’70s, his father, Lamar, played banjo for both Bill Monroe and Hazel Dickens. However, as a member of bands such as Psychograss and Phillips, Grier, & Flinner, his own recent work has often tended toward the avant-garde. This record is neither traditional bluegrass nor reckless jamming. It is impressive, solid, and — though this seems at odds with Grier’s colorful personality — conservative flatpicking.

I’ve Got The House To Myself is a true solo album; Grier’s acoustic guitar needs no supporting cast. Nearly half the songs are traditional fiddle and banjo tunes: “Bill Cheatum”, “Turkey In The Straw”, “John Henry”, “Sally Gooden”, “Arkansas Traveler”. There are also a couple self-penned numbers, as well as a cover of DeFord Bailey’s “Evening Prayer Blues”. The lovely “Ookpic Waltz” stands out as a personal favorite.

One could easily stick this disc in the changer with Doc Watson & Son and Norman Blake’s Whiskey Before Breakfast. Grier’s work is clearly a product of the present millennium, but one can detect the subtle influences of earlier stylists. Which is not to suggest this is a simplistic recording — Grier’s timing is instinctive, and his technique is flawless. He is quite capable of pyrotechnics, but he saves all that for his Rice-meets-Hendrix reading of “Little Britches”, included here as a hidden bonus track.

Ultimately, though, this album isn’t about mind-numbing virtuosity. And there’s much to be said for talent tempered by restraint. 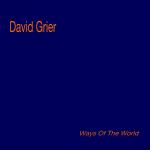