With Gold Country / Country Gold, Cindy Emch, aka Secret Emchy Society, releases another set of boisterous, heartfelt, and frequently tongue-in-cheek songs, her freewheeling persona belying a well-honed songcraft, including hook-infused tunes and soundscapes that integrate a wide range of country and rock sources.

The album opens with a version of “Cowboys Are Frequently, Secretly Fond of Each Other” that finds Emch subverting the macho cowboy motif, declaring that “inside every cowboy there’s a lady who’d love to slip out.” “Think I Do” is a straightforward country ditty driven by plunky drums and plucky guitars, Emch tapping into country’s golden age a la Loretta Lynn, George Jones, Patsy Cline, et al.

“Another Time & Place” shows Emch’s ability to pull off a more languorous tune. “My heart burns like a star for you,” she wistfully sings, remembering past days and yearning for a connection that she hasn’t experienced “in 12 months’ time.” Andrew Waegel on pedal-steel and Tolan McNeil on lead guitar offer tasteful interplays. With the Paisley Fields and Mya Byrne-penned “I Wish I Was in Texas With You,” Emch demonstrates her vocal range and cogency, moving from midrange and relatively restrained verses to higher-pitched and brasher choruses.

“The Bars Are Closing” fuses reflections on the craving for distraction with observations regarding the current state of the country (“The bars are closing, the city’s crazy / and all we know is right here”). Emch’s tone and timbre will remind some listeners of Sarah Shook, which is to say, Emch is probably a vocal influence, as well as a socio-political model, for the younger, North Carolina-based singer-songwriter. “Birch Bones Redux” captures a country-goth sound, the track bathed in swampy reverb. “From the birch bone sung the ghost of her dreams,” Emch moans, voice bolstered by brushy drums and a guitar part that oscillates between rapid picking, staccato accents, and a trebly drone.

The Jbird McLaughlin, Jenny Amber, and Deleina Mae-written “My Old Flame” is an acoustic-based and buoyant track, Emch’s lead vocal offset by well-mixed backup parts. Waegel’s pedal-steel licks and McNeil’s twangy guitar runs are notable. Closer “Murdered Your Bourbon” is Emch’s contribution to the canon of drinking songs. “That bottle was low down / and we finished it right,” Emch sings, concluding the sequence on a bacchanalian note.

Cindy Emch is a charismatic songwriter, singer, and band leader. Also impressive is her activistic courage, the way she persistently strives for greater inclusivity in the country genre. With her own music and her support of other and often marginalized artists, she makes a potent stand for diversity in a nation that more and more often seems to be forgetting its democratic convictions.

Gold Country / Country Gold is out May 20. 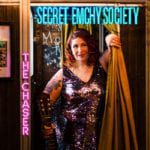