ALBUM REVIEW: Po’ Ramblin’ Boys Hew to Tradition While Embracing the Progressive on ‘Never Slow Down’ 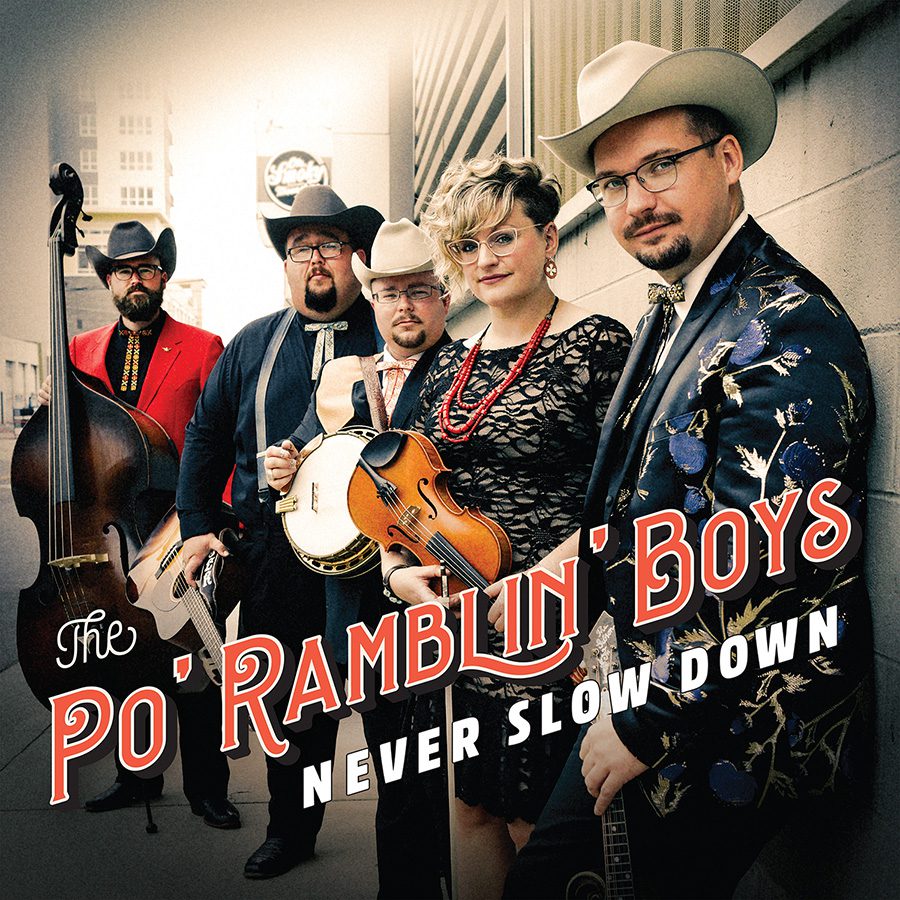 The world of bluegrass has a reputation for holding fast to tradition, nodding always to the past. But all things and people came from somewhere, and it’s important to honor the lived experiences of the previous generations. And musicians especially tend to put their own spins on what it means to be human.

The Po’ Ramblin’ Boys (C.J. Lewandowski, Jereme Brown, Josh Rinkel, Jasper Lorentzen, and new official member Laura Orshaw) embody this duality better than anyone else in the roots and bluegrass scene today, especially on their latest and aptly named album Never Slow Down. The band started out of need and convenience, as the house band at Ole Smoky Moonshine Distillery in East Tennessee, and quickly cruised into the bluegrass scene. Within a few years, The Po’ Ramblin’ Boys had won the International Bluegrass Music Association’s 2018 Emerging Artist of the Year award, followed with a Grammy nomination for 2019’s Toil, Tears, & Trouble, and playing the Grand Ole Opry later that year.

As is familiar by now, The Po Ramblin’ Boys were forced to slow down in 2020. The band didn’t stay still long for very long, though, gathering a few months into the pandemic to record a handful of songs. During this time, they also signed to Smithsonian Folkways, the first label to release a bluegrass album, which itself is another nod to tradition. During the rest of quarantine, Po’ Ramblin’ Boys wrote and recorded Never Slow Down as a celebration for community and a return to the road.

Like their previous albums, Never Slow Down features interpretations of others’ songs nestled neatly alongside original material. As is now a tradition, they’ve covered another George Jones song, this time reinventing “Where Grass Won’t Grow,” with Orshaw’s voice carrying more heart than the original. They also found and reinterpreted a Ralph Stanley deep cut, “Lonesome,” for which Rinkel researched the lyrics and brought the vocals to the forefront in a way that makes it a new song. The originals, “Missing Her Has Never Slowed Me Down” and “When Are You Gonna Tell Me?” immediately feel old, yet novel — like future standards.

Two of the strongest cuts come near the back end of the album, first with their rendition of the fiery Hazel Dickens tune “Ramblin’’ Woman.” They find a groove that defines the best of bluegrass, with barn-burning fiddling and sprightly picking accenting Orshaw’s vocals. “Woke Up with Tears in My Eyes” follows, a song first written and played by Don Brown and The Ozark Mountain Trio, with The Po Ramblin’ Boys reinterpreting it with tight harmonies. Lewandowski plays the same mandolin used by Don Brown on the original recording, coming full circle to celebrate a band he calls one of his greatest inspirations.

With Never Slow Down, the Po’ Ramblin’ Boys continue to bridge the gap between the traditional and the progressive. They take the old and make it new, while taking the new and rendering it timeless.