Adam Yauch: The Impact of MCA on This Roots Music Fan

I tried to put pen to paper when the news broke that Adam Yauch, a/k/a MCA of the Beastie Boys, had lost his battle to cancer a few months ago.  But I’m not a hardcore Beastie Boys fan and there was so much out there that it seemed silly for me to post my bystander observations.

It’s not that I felt like I should write simply because a musician had died.  It was more than that.  As I got to thinking about it, I realized how unique Yauch was as, not just a musician, but also a human.  And the closer I looked, the more I realized the impact he’d had on me.

So now, a day after his birth date, I’ll share a few of those thoughts.

When I was young, my best friend was my neighbor.  He was four years older than me and therefore infinitely cooler and worldlier.

When I was probably nine years old or so, I remember my friend and I camped out in a tent in my back yard.  We stayed up late and I remember he played his “License to Ill” cassette on my boom box.  He said it was some new thing that was really cool and that we had to play it low because if the adults heard, they wouldn’t like it.

All I really remember about the experience was that it was a kind of music I hadn’t heard before.  And I remember something about doing it with a Wiffle Ball bat, which seemed either really violent or really dirty.  Maybe both.

After that, I don’t remember much about the Beastie Boys for a long time.  Sure, I remember “Fight for your right to party” being a popular phrase.  But I missed the “Paul’s Boutique” boat entirely.

Then, when I was a freshman in high school, I noticed the Beastie Boys again.  I, like most guys my age, had gone through, or was going through, a hip-hop phase.  The Beasties had put out a new album, “Check Your Head” and they were doing something I hadn’t seen before; they were playing instruments.  Rather than rapping and jumping around in front of a guy with a turntable, the Beastie Boys were playing rock music, fusing it with their hip-hop.

I’m sure there were other rap acts doing that at the time, but none that I had access too.  I was a white kid in a small, rural community.  And I hadn’t seen two genres of music blended like that before.

In college, I remained a “marginal” Beastie Boys fan.  I remember this was the time that Yauch and the Beastie Boys got very involved in the Free Tibet movement.  I admit that I’m still under-educated on this cause and the issue at its core.  But, this was the first time I remember seeing a celebrity really stand up for a unique cause.  I’d seen the “We Are the World” thing and I knew about Farm Aid.  But, those were huge causes that appealed to a large, mainstream audience.  I hate to reduce it to this phrase, but Free Tibet was a “niche” thing.  Not everyone knew about it. It wasn’t popular.

But Yauch used his celebrity status to bring attention to something he obviously believed in with his whole being.  Celebrity causes are de rigueur now, but they weren’t then.  Not near as much, anyway.  Or, at the very least, not to my awareness.

Somewhere around the mid-point of my college years I lost interest in whatever rap music I’d been into.  I lost track of the Beastie Boys, but always had respect for them.  I remember hearing about Yauch’s personal spiritual journey.

Rolling Stone Magazine shared a great piece recently on MCA’s “path to enlightenment”.  (Click on this sentence to view the article).

Without going into detail, I happen to be on a similar path right now.  Not one of Buddhist enlightenment, but one of walking away from something I used to believe and no longer do.  A path of genuine seeking.  Seeking meaning.  Truth.

I found comfort and inspiration in Rolling Stone’s account of Yauch and his personal spiritual journey.  While the specifics of his and my journey may be very different, it’s still a beautiful example that I look to.

After his death a few months ago, I read that he had started Oscilloscope Laboratories, a film production company that had created many of my favorite documentaries (Howl, William Burroughs: A Man Within, The Other F Word, No Impact Man, Exit Through the Gift Shop, If a Tree Falls: A Story of the Earth Liberation Front, and more).

I was amazed to discover this bit of news.  I haven’t seen all of the company’s films, but Oscilloscope is a name I recognize and respect.  Some of the best films I’ve seen in the last year or two appear within those parentheses above.

I am not and never was a Beastie Boys super fan.  I own some of their music, but not all of it.  There are many more people much more qualified to write about Adam “MCA” Yauch, than me.

But, the Beastie Boys were my introduction to rap/hip-hop.  They showed me that two styles of music (rock and rap) could combine in a unique way.  Yauch was one of the first examples I saw of a famous person using his influence to benefit something he believed in.  His spiritual journey is a source of inspiration.  He is a great example of an artist learning about another medium and pursuing that dream (starting Oscilloscope) to great artistic effect.  (How many musicians try to act, or how many musicians try to make music…often with disastrous results?)

Joe Strummer, Johnny Cash, Mike Ness…those guys have had a major impact on me, too.  But I AM a super-fan of those guys and their music.  That’s expected.

I didn’t expect to look back and see that this rap artist that I was only marginally interested in had such an impact on me.

But he did.  And I’m grateful for it. 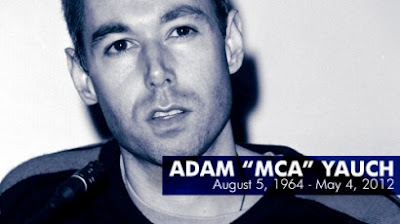