In a recent post, I discussed some contemporary stringband artists that combine the influences of bluegrass and old-time with classical music conventions. One of the projects discussed at length was Abigail Washburn’s work with the Sparrow Quartet. A question I raised was what one might call these genre-defying acoustic experiments (Chambergrass? Grass Nouveau?). Certainly, no consensus was reached on that matter, which is just as well because the traveling daughter is taking her journey in very different directions anyhow. After watching a recent live performance and reading more about her forthcoming album, it appears Ms. Washburn is eschewing the ascetic density of her acoustic work with the Sparrow Quartet for what might be a lighter, more electric, and more pop-influenced body of work.

In fact, her press packet calls the forthcoming album, City of Refuge, “a sublime marriage of old-time and indie-pop,” and describes the “catchy hooks and grooves” found within it. I have to state my biases up front by saying that I would gladly sacrifice “catchy hooks” for the rest of my music listening life in exchange for more of the gorgeously funky complexity of the Sparrow Quartet. However, that’s not to say that City of Refuge might not be a masterwork of musical brilliance that also happens to inspire one’s ass to move. Evidence supporting that hypothesis was at least partially on display at The Basement in Nashville earlier this week. 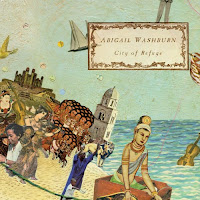 The set opened with a solemn vocal affair backed by little more than recurrent string drones performed both live and “live sampled” (performed on stage and then sampled into repeated background loops, a process I still love to watch no matter how ubiquitous it is becoming.) Washburn’s music has often struck me as having an air of erudite coolness, so I wondered with this opening tune if austerity would be the defining charecteristic of her new endeavors. As suggested above, I was dead wrong. Washburn jumped right into my favorite tune of the evening, a groove-inflected murder ballad titled “If I Had a Shotgun.” With an oversized cello banjo strapped around her, she belted out a wonderfully danceable tune above her own clawhammer strumming while a killer bass line thumped out the low end. If these were the “catchy hooks” mentioned in her press release, I was definitely reeled in immediately. Her teasing introduction to the tune also demonstrated a surprisingly playful stage persona I wasn’t anticipating (this was my first time seeing Washburn live.) She described her love for murder ballads alongside her disappointment that women are always the victims in this narrative genre (a point I also made in my recent list of Halloween death ballads.) Having armed the would-be victim with a shotgun in her rendition, Washburn joked about her husband, Bela Fleck, asking if some unknown violation on his part had inspired her songwriting. If so, I hope he does it again provided it can catalyze an equally rhapsodic hybrid of buck dance and break dance.

As an aside, I should note that the performance I caught was the second of Washburn’s three-week residency at The Basement in Nashville. The residency consists of Washburn playing a roughly hour-long set each week (totally free of charge) followed by sets devoted to up and coming new talents. This is a very cool (and very generous) concept. Despite an early show time and the short set, the intimate venue was packed. Four other musicians who, between them, played keyboards, trumpet, fiddle, drums, double bass, and guitars both electric and acoustic joined Washburn and her banjos on the small Basement stage. 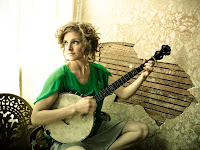 The rest of the show varied between sparse tunes that put Washburn’s stunning vocal abilities front and center, and denser compositions that featured a sonic interplay between myriad tones and instruments. Occasionally, the pop influence was on full display as in the keyboard laden “Chains” (I believe that was the tune’s title.) Unfortunately, I cannot remember if this was one of Kai Welch‘s tunes performed to fill out the set list or a tune from Washburn’s forthcoming album. Frankly, I hope it’s the former, because I found the pop tendencies to stand out like a somewhat overexposed Warhol snapshot within a gallery of more mysterious prints by Diane Arbus or William Eggleston. Mr. Welch was a close collaborator on the album and is largely responsible for helping Washburn explore her pop pursuits. I am curious to see the terrain found on the middle ground between these two artists.

More welcome to my sensibilities was a tune inspired by Washburn’s work teaching English as a second language to local Chinese immigrants. Washburn speaks fluent Chinese and, apparently, was heading towards the study of law in Beijing just prior to her unexpected success in music. “Dreams of Nectar” describes the unexpected difficulties and unvarnished realities found in the “land of the free” for those who have come to America pursuing a better life. I suspect that Washburn can relate to this feeling of dislocation on some level.

In both her music and her life, Washburn seems to be a restless traveler, exploring new territories by stretching the roots of her own history and culture. I assume that City of Refuge seeks ways to make those roots even more pliant as she expands in new directions. Her show at the Basement piqued my already substantial curiosity, but unless I can get my hands on an advance copy, we’ll have to wait until January 11th to discover the lay of the land in Washburn’s newest cityscape.

THROUGH THE LENS: AmericanaFest 2021 Was a Shelter from the Storm