Mamaw is, I think, 88, and we have worked her too hard this last little while. See, the orchard we began putting in a few years back is still too young to begin bearing, and, what with a late local frost, we didn’t even get any blueberries this summer. But the one pear tree Dan & Marge put in when they built their house in the woods, back when Susan was in middle school, still sometimes bears. Last year the pears played host to sand hornets, and we got nothing.

This year, we got something like a thousand pears. Off one mature tree. Not counting the ones so high up off the ground we couldn’t get to them, nor the ones the deer ate.

This kind of prosperity is sometimes a problem, or, at least, a challenge. We wrapped all the pears in newspaper (see: old technology is still useful), and boxed them until they were ripe enough to put up. And then Dan dug out his fancy apple peeling/coring gadget, and we began looking online for all the things we could do with pears beyond simply canning them. So now we have pear sauce, and pear butter (apple butter, only with, y’know, pears), and cans and cans of pears.

A good thing, all around, right up until Dan scented the cold coming in the wind and decided it was time to trim the chicken flock. He does most of the work, and I’m still a somewhat useful apprentice at this task. Either way, we have four less to feed today that will be feeding us, and one more died of apparently natural causes that we simply tossed to the coyotes along with the entrails.

Point being, once we’ve hacked them up, they go to Mamaw’s house to be separated into parts and so she can harvest the organs and unfinished eggs which are, apparently, a delicacy if you were raised in a mining camp, or of her rough vintage. She wasn’t entirely happy to see me, her kitchen only barely cleaned up from the pear episode, but she managed.

That, then, is the end of the garden’s productivity for this season. To recap, off the top of my head…not counting the four or five rows in our 10,000-square-foot enclave that were never try enough to be plowed or rototilled, we had a tolerable harvest. We have or have put up (as mashed potatoes or potato soup base) about 35 gallons of red potatoes; we canned a new family record 131 quarts of greasy beans. Those are the staples. We have okra left over from last year, which is a good thing since we/I never got around to hoeing the okra, and it didn’t produce but a couple frying pans full. Bell peppers didn’t do much, and we deep fried most of the banana peppers (which is what they’re principally for), and jalapenos, though I have a couple baggies of jalapenos frozen. We have quarts and pints of tomato sauce and pasta sauce and salsa (here’s a handy recipe: open a jar of salsa, spread it on the bottom of a large frying pan, crack as many eggs as fit or you want to eat, cover the frying pan, poach it all together on moderately high heat, add chips and cheese), but I’ve lost track. And more, but it’s early and I’ve forgotten about it until it’s time to cook. Spinach and kale, our own garlic. Not enough onions, again.

Both freezers are full, though there’s room for the chicken. Our pantry overflows.

I just finished Margaret Atwood’s new book, which may or may not yet be on the shelves. We aren’t Gardeners with a capitol G, but we’re trying. And it’s been a pleasant way to eat, to feed my family.

A lot of we 50somethings are out of work, or under-employed. I am grateful that a couple years back I began dabbling in the soil, and that I have a patient teacher. But some days it’s difficult to know into which direction the energy should flow. 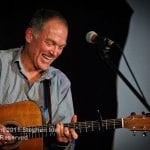 Contest: The Rose Garden Is Looking For A Few Good Songwriters