A brief update from the garden

In other iterations of this site, I sometimes nattered on about planting things in the ground and hoping they grew, and stuff like such. In that spirit, then, with the dirt still on my hands and now staining the keyboard…

…over the winter, we doubled the size of the garden, the one out at my father-in-law’s place, not the one we abandoned at our home in town. This involved using power tools and a digging device which attaches to the back of the tractor, and one’s back. And mixing cement. We somehow counted the thing and ended up with 10,000 square feet, which I’m sure is wrong, only I don’t know if it’s way over or way under. I’m used to measuring things in picas and points (six picas or 72 points make an inch), so an expanse of wavy land is mysterious.

Some of that, anyhow.

Dan has already put in garlic and green onions, and mulched the asparagus/rhubarb stand, and probably done some other things I haven’t noticed. And we planted two more apple trees down in the orchard…the most optimistic thing men of our years (67 and 50) could possibly do, especially since none of the trees in our four-year-old (or is it three?) orchard are yet ready to bear fruit. That’s not the point, nor do we really know what we’ll do with all the fruit they do bear, should that actually happen.

Today, then, anticipating this evening’s rain, we planted three rows of red potatoes. They will go in the pressure cooker with the greasy beans, and, then, will last as far into the winter as we can manage to keep them from rotting. Still, three rows is overkill.

And I’m sure my back will have its say in the morning. Planting potatoes involves doing these things: putting the new cultivator on the back of the tractor and running it across the soil; bringing the ’tiller down from the barn, and running it across the soil four or five times; bringing the hand plow down from the barn, after we change the blade on it, which involved going back to the house to get the grinder so we could take the bolt off the smaller blade, and using it to cut a straight line across the garden. That part took several passes, because I am inexpert in these arts, and my father-in-law insists upon straight lines. As do I, though I tend to be more lenient when physical labor is involved. Then one tosses pre-cut potatoes (bigger than you’d cut for stew, one eye to each fragment) into the ditch you’ve cut with the hand plow, following behind with some 10-10-10 fertilizer (we aspire to being organic, but mean to eat, and the soil is not yet repaired to the point where we can avoid commercial fertilizers entirely), and then hoeing dirt over the whole mess.

It’s also a bit of an experiment. The top row we covered only in dirt; the middle row we covered in leaves and then hoed dirt and leaves together into a mound; the third row, we simply covered in dry leaves. They may all work equally well, or not. We’ll see.

And then we put all our tools away, except whichever one we forgot down in the garden, and headed off for cool drinks. A pineapple milkshake, in my case, since I just came back from the big city with a car full of frothy beverages which won’t be suitable to drink until at least tonight.

Gratuitous musical footnote: Because Al Moss tells me I should, I’ve been carrying the Band Of Heathens CD in the truck. I remembered it was there today, and gave it another try. Al has astonishingly good taste for somebody who’s been a paid promoter of music all these years, and generally I have learned to trust him. BOH seem like they’d be good on the radio, but I’m still not convinced I want to play them at home for my friends, if that makes any sense. But we’ll leave the disc in place until Maggie makes me put Lucinda Williams back in. 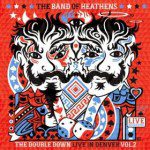